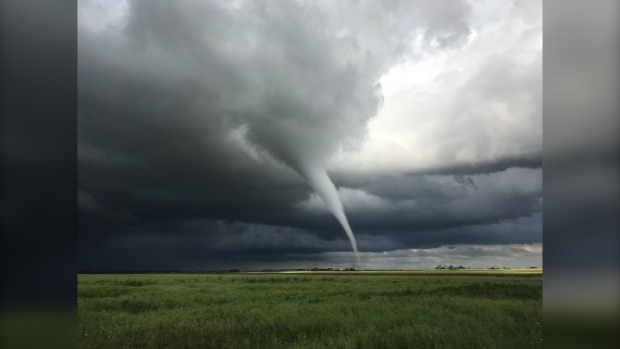 WINNIPEG — Environment Canada has announced that a tornado touched down Thursday evening.

It said the twister touched ground near Alexander, Man., around 5:40 p.m.

Environment Canada added there have been no reports of damage.

A tornado warning had been in place for several areas in western Manitoba but all warnings have since ended.

The City of Brandon was under the tornado warning at one point, but is currently under a severe thunderstorm watch.

A tornado warning was previously in effect for the R.M. of Wallace-Woodworth, including Virden, Elkhorn, and Kenton, as well as the Riverdale Municipality, including Rivers and Wheatland, along with the R.M. of Whitehead, including Alexander and Beresford. The warnings have since ended, but the regions are under severe thunderstorm watches.

If people are not able to make it into a structure, they are told to lie in a low spot and protect their head from flying debris.

The warnings came after a tornado touched down just south of Virden on Friday, Aug. 7. That twister was categorized as an EF-2 and two people died in the incident.