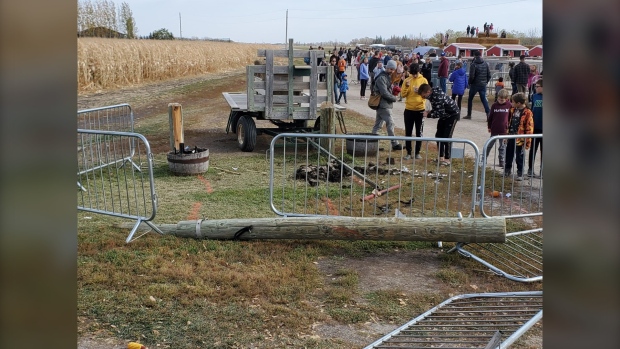 WINNIPEG — At least three people were injured on Sunday afternoon after horses got loose at a Manitoba corn maze.

The incident took place around 2:45 p.m. at A Maze in Corn when the harness for the horses, which take people on hayrides, malfunctioned.

Clint Masse, the owner of the maze, said a volunteer was asked to stand in front and hold onto the harness, but they “got too nervous and let go.”

Masse said the horses, which were no longer harnessed at this point, then ran in the exact hayride route, but the issue was they travelled at a high rate of speed.

“They knew where they wanted to go, they just didn’t know what speed,” he said.

When the horses finished the loop, they knocked over the top hitching rail, which is where the next group was waiting for their hayride.

Masse said three people were hurt in the incident – two girls, who he believes were hit by the hitching rail, and a boy who ran away, slipped and fell.

An ambulance came to the scene, but Masse didn’t know the exact injuries. At least two people were taken to Health Sciences Centre.

He noted that he doesn’t blame the volunteer for what happened and he feels terrible about it.

A Maze in Corn is located near Saint Adolphe, Man., approximately 25 kilometres south of Winnipeg.