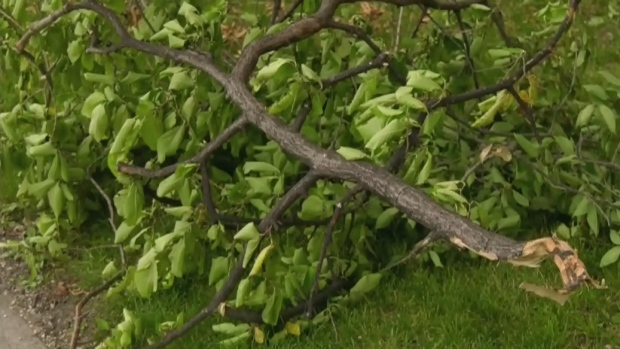 WINNIPEG — The Manitoba prairies are known for being a windy part of the country, and Sunday evening, it earned that reputation.

Powerful gusts of wind knocked down trees and disrupted power lines across the southern part of the province.

Chuck Huard lives on Valour Road in the West End. He said the power went out on his street from Portage Avenue to Ellice Avenue.

“I was in the bedroom and all of a sudden we lost all power, and I thought, ‘okay, what did I do now?'” said Huard. “Then I came outside, and that’s when I noticed the whole street was black.”

Manitoba Hydro said power outages in the province peaked at about 5 p.m. Sunday afternoon, with 500 power outages affecting over 18,000 customers.

The outages were all across southern Manitoba, but primarily around Lake Winnipeg’s southern basin, where wind speeds reached over 100 kilometres per hour.

Hydro said as of noon Monday, they had about 200 outages remaining in the province, affecting close to 5,000 customers.

The majority of customers still without power are in the south basin of Lake Winnipeg, and east into Whiteshell provincial park.

Huard said he wasn’t in the dark very long.

“It only lasted about 10 or 15 minutes, but we had to do a lot of scrambling to find candles.”

Across the street from Huard, Gary McFarlane had a similar experience.

“Everything shut off, and I was wondering what’s happening. Then I tried to turn on the lights, and nothing came on.”

McFarlane said his power was off for close to two hours, his phone was down, and high winds ripped branches from the tree in his front yard.

The City of Winnipeg said they received 120 calls in 24 hours related to tree damage, and crews continue to address the service requests.

Manitoba Hydro said it expects crews to restore service to all customers by Monday evening.

Huard is happy the disruption to his power didn’t happen in the summertime.

“I’m glad it’s not the winter, cause you need your heat to run, and it doesn’t run too good without electricity.”