Home  »  News   »   ‘This was never our desired outcome or ending’: Jets and Byfuglien terminate contract 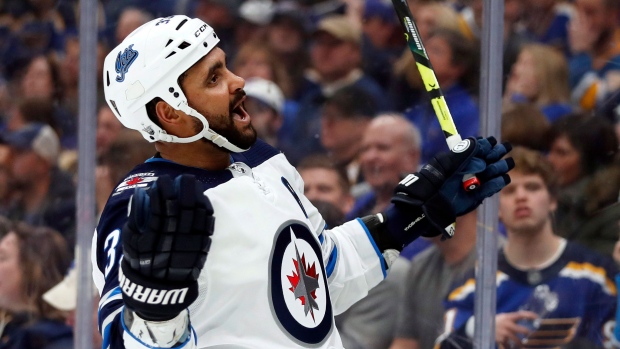 The hulking defenceman’s crushing body checks, his unique style, the mind games in heated playoff series, the ability to ragdoll two opponents out of a scrum, and that booming slapshot.

Those fond memories, however, don’t make Friday’s official parting of ways any easier.

In a joint statement released by the NHL and the NHL Players’ Association, the Jets and Byfuglien announced the sides have agreed to a mutual contract termination, bringing an end to a strained relationship between the team and a former face of the franchise.

Thank you Dustin Byfuglien for your contributions over the years to the Winnipeg Jets!

As a member of our organization, Byfuglien played 636 regular season and playoff games and tallied 441 points in that time. pic.twitter.com/bXvJ9zcy47

“This was never our desired outcome or ending with Dustin,” Cheveldayoff said on a conference call. “If it were the Jets writing the perfect script, it would’ve ended with Dustin holding a great, big silver trophy over his head at centre ice and flashing that great, big smile.

“But we’re grateful for the time that we did have with Dustin here. He was a force of nature on and off the ice. He has a tremendously infectious personality that you can’t help but like the person. He played a significant role on our team for a long time.”

Byfuglien, who walked away from US$7.6 million both this season and next, and did not receive a financial settlement, had been a staple with the organization since its last season in Atlanta as the Thrashers following a trade with Chicago in the wake of the Blackhawks’ 2010 Stanley Cup victory.

A fan favourite for everything mentioned above, he was a four-time all-star with the Thrashers/Jets, while also serving as a long-time alternate captain.

But things turned sour at the beginning of this season.

After 8 years of playing for Winnipeg, this chapter of our life comes to a close I have nothing but gratitude towards the Jets for an amazing 8 years in Winnipeg. What an awesome experience it has been. From having our first baby here, to now raising 3 kids in this much loved community. We have grown up together and as a family here, and I wouldn’t change that for the world. The support from Winnipeggers has been overwhelming. I appreciate all of you that have reached out to me with support and kindness. No one can know for certain what their future may bring. I never thought for a second our time here would be cut short under these circumstances. The past 8 months have been the hardest of my life. I struggled to come to terms with the situation. I struggled as a wife and as a mother under the stress. I didn’t want any of it to be true. This has been the only life I’ve known for a long time, and I am beyond devastated to have to leave here. I love this city, and the people in it. I had the best 8 years of Dustin’s NHL career here in Winnipeg. I am going to miss every second of Dustin playing here. I’ll miss these amazing girls who are some of my absolute best friends. I’ll miss the schools, activities, and sports for the kids. There is just something about Winnipeg that is different. People feel like, and treat you like family, and I’m so grateful to have experienced this. I will always be a Winnipegger at heart. Thank you so much to this city and the Jets organization for everything. Xo

Byfuglien, who signed a five-year, $38-million contract extension to stay in the Manitoba capital in February 2016, was granted a leave of absence for personal reasons on the eve of training camp.

“We met in my office that evening, and he informed me he didn’t know if he had it in him to continue playing in the NHL,” said Cheveldayoff, who declined to reveal much about the situation before Friday. “We connected again together (Sept. 21) and had another long conversation. We were getting to the point where we had to start making some roster decisions and (salary) cap decisions. I asked him if there has been a change. He said he still didn’t want to retire, but still didn’t know that he had it in him to continue to play.

Cheveldayoff, whose relationship with Byfuglien goes back to his tenure as an assistant GM in Chicago, said the Jets were informed in early October he intended to resume his career following ankle surgery later that month.

Byfuglien, who Cheveldayoff said didn’t communicate any health issues over the summer, then filed a grievance through the NHLPA believing he should be paid while recovering from a hockey injury. He rehabbed into January, but didn’t proceed to the point where he got back on skates, which ultimately brought the sides to Friday’s announcement.

“We certainly live in a time right now when we all understand that things do happen that are sometimes unexpected,” Cheveldayoff said. “It’s about how we choose to move on.

“Dustin still remains, in my estimation, a tremendous person.”

If this is the end of the NHL line for the six-foot-five, 260-pound native of Roseau, Minn. — a dominant force who could play defence or forward — he will be remembered for his unique abilities in a game that’s seen many bigger players mostly fall by the wayside.

“It shows his hockey sense and his ability to adapt,” Cheveldayoff said. “Buff loved to play the game a certain way. He played it physical.”

“He could intimidate you because of his size, but he really wasn’t that dirty of a player,” Cheveldayoff added. “He likes to play with having an impact on a game.

Byfuglien’s absence this season was a massive double blow to a Jets’ defence that also lost Jacob Trouba, Tyler Myers and Ben Chiarot over the summer. They were not only minus one of their best players, but the uncertainty of the situation also meant Cheveldayoff was unable to use the vacant $7.6 million cap hit to improve his team.

“If he really didn’t have it in him to continue to play, that’s probably the most honest thing.”

Winnipeg managed to stay competitive in 2019-20 thanks in large part to the Vezina Trophy-calibre goaltending of Connor Hellebuyck, and was in a playoff spot when the NHL paused its season March 12 amid the COVID-19 pandemic.

“I’m really actually quite proud of the job that the coaches, but more so that the players did to adjust,” Cheveldayoff said. “Hopefully we can continue and finish off what is certainly a very difficult year.”

So will we ever see Byfuglien, who is now a free agent and can sign with any team for next season, suit up again in the NHL?

“There’s only one person and one person only who can answer,” Cheveldayoff said. “And that’s Dustin.”

This report by The Canadian Press was first published April 17, 2020.