Home  »  News   »   ‘They’re guitars, not human lives’: Montreal store owner says getting looted was worth it to fight racism 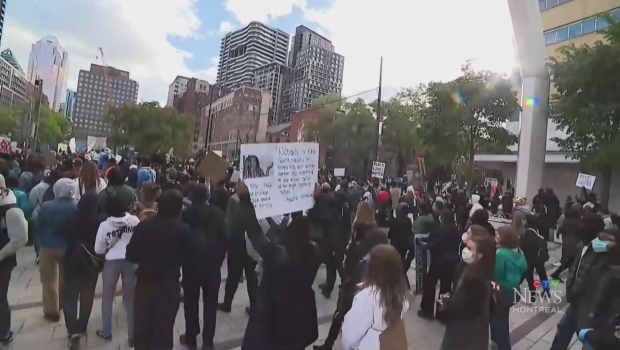 They showed young people stepping through the smashed windows of businesses along Ste. Catherine St., and one business in particular—Steve’s Music Store, where looters were filmed carrying out guitars.

It’s clearly not good for business, says the owner of Steve’s Music, a Montreal institution. But don’t get him wrong, he says: it was all worth it.

It was “unfortunate that a few hooligans turned it into a free-for-all,” he says.

“It is awful. But next to what some people are going through, this is nothing.”

The store’s insurance company is currently reviewing the damage, and Lanteigne isn’t sure yet how it’ll all turn out financially, he said.

The Steve’s Music in downtown Montreal first opened in 1965, and Lanteigne has run it since the early ’80s, eventually moving it from St. Antoine St. to nearby Ste. Catherine three years ago.

The pandemic had already created unprecedented problems. Not only was the shop shut down for nine weeks, but many of its customers are professional musicians who are out of work indefinitely, Lanteigne says—venues and live tours will likely be some of the last things to restart.

Steve’s Music was allowed to reopen last Monday. Having people walk away with the store’s stock less than a week later was not the recovery Lanteigne envisioned.

On Sunday night, “I was watching a really miserable, boring documentary when I was messaged” that the store was being looted, he said. He looked up the footage “and there it was.”

He stayed home while two staff members who lived closer to the store went there to try to secure it.

“We’ve lost a great deal of product, not to mention the inability at this point to refresh that product, because manufacturers are kind of in the same boat that we were in for the last nine weeks in that they’re not making guitars,” said Lanteigne.

“So even if we did go find a pot of gold and want to go buy a bunch of guitars, there’s not really a lot of them for sale.”

Still, he says, he hasn’t regretted for a minute that the demonstration happened.

“I think if you see the clip of Mr. Floyd being executed, for lack of a better word, and you’re not moved by that—if you weren’t aware that this was going on before, or you were oblivious to it, you can no longer just turn a blind eye to it,” he said, referring to Minneapolis man George Floyd, whose death while in the custody of that city’s police last Monday sparked off this week’s nationwide protests.

“Something’s got to change,” he said. “These things can’t happen anymore.”

Though Floyd’s death happened across a border, Lanteigne said he was glad to see Montrealers marching, too.

“Racism’s an issue. It’s an issue everywhere you go,” he said.

Lanteigne, who grew up in a “small community outside Quebec City,” said he didn’t feel he was in a position to contradict Quebec Premier François Legault’s comments Monday that Quebec had “no systemic discrimination.” Legault also said “it’s a very, very small minority” of Quebecers who discriminate.

“I don’t think that some punk who sells drums for a living is in any position to argue with an elected official,” said Lanteigne, adding that the premier has been “under the gun…for 10 or 11 weeks. I wouldn’t switch places with him for anything.”

But, he said, he thinks the goal should be to tolerate no racism. “How many is not a problem? Seven?” he said. “Sixteen? I don’t get it.”

Staff spent Monday cleaning up and the store reopened on Tuesday, he said.

They’re “very fortunate” to have a loyal clientele, he added, who are “volunteering to help and they’re doing everything they can.”

Eleven people were arrested in the looting and dozens of businesses damaged. Lanteigne says he believes most of the looters, or “certainly those that started it…weren’t here for any other reason than to cause some havoc and make off with a few guitars.”

But overall, he says he’s just not worried too much about it.

“We lost some guitars and some pedals, some microphones,” he said. “Windows got broken.”

But “nobody got hurt, and that’s what we care about more than anything, I think. And if this demonstration brings up awareness of this and it keeps one person from getting hurt in the future, then…I think it’s great,” he said.

“I’m not saying ‘Hey, come over here and do this next week,’ but you know, let’s kind of put it into perspective. They’re guitars, not human lives.”