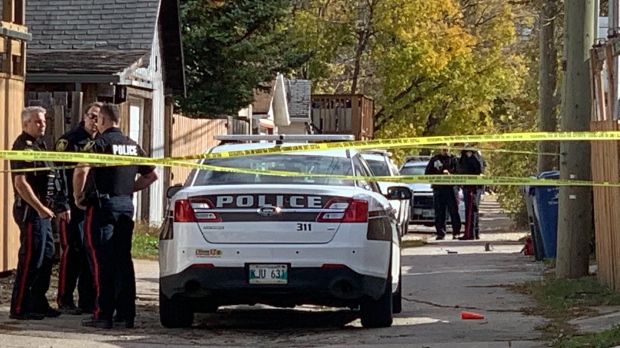 WINNIPEG — A man is in unstable condition after being shot by police in a back lane in the William Whyte neighbourhood in the North End.

Police were seen responding in a back lane in the area of Boyd Avenue and Powers Street Wednesday afternoon.

Const. Rob Carver of the Winnipeg Police Service said officers responded to a report of an armed man in the area around 12:40 p.m.

“At some point in time, fairly after soon after the initial contact, officers were forced to discharge their weapons,” Carver said. “The male was struck and transported to hospital in unstable condition.”

A 36-second video obtained by CTV News, taken on the scene by people in the area, shows a police cruiser with its front doors open in a back lane.

What sounds like two consecutive gunshots are heard in the video, followed by someone screaming “Oh my God, they just shot him.”

There is a four-second pause before one more gunshot is heard.

Multiple officers are seen in the video and are heard yelling, but it is not clear what they are saying.

Another video taken at the scene shows paramedics loading a person into the back on an ambulance.

Stephanie Smith, who lives in the area, said for an hour or two before the incident, she saw a man walking around the neighbourhood carrying what appeared to be a pistol with a longer barrel.

Smith said she has lived in the area for about four years and has seen people walking around with guns before.

“I know what it’s like now in this end, and it’s only getting worse,” she said. “More or less, just lock your doors, lock your cars and keep your kids close by you – that’s what I do.”

Multiple officers were on the scene Wednesday afternoon and police tape blocked off the back lane.

-with files from CTV’s Josh Crabb and Jamie Dowsett