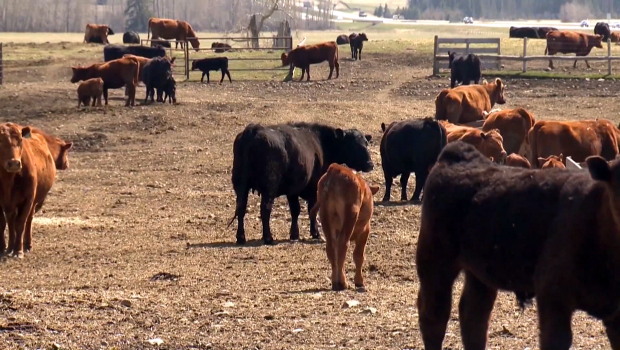 WINNIPEG — The federal government unveiled a $252-million aid package Tuesday to help the agriculture industry weather the COVID-19 pandemic — but the amount is far less than what farmers and producers in Manitoba and across Canada say they were hoping for.

“The outcome today really falls short of what we need,” said Manitoba pork producer and president of the Canadian Pork Council Rick Bergmann.

“We heard from the federal government that food security is a priority. We thought we would have had a little more traction than what we did. So we’re really concerned about that.”

“The product is all here, we just have to get it to the consumer,” said Colin Crockatt who runs a cattle and grain farm near Warren, Man.

The prime minister pledged to ease the pressure facing farmers like Crockatt.

“Farms and processing plants are raising more animals than the system can process into things like steak and bacon, because of COVID-19,” said Trudeau at a Tuesday news conference.

“For many famers, this crisis means that they have to keep animals for longer periods of time, which can be expensive. With this funding, we’re giving extra help to beef and pork producers, so that they can adapt to the crisis.”

The emergency aid includes $125 million for cattle and hog farmers to deal with costs related to COVID-19, and $77 million will help food processors purchase more personal protective equipment for workers. The Liberals also committed $50 million for a Surplus Food Purchase Program, to buy unsold products like potatoes and poultry, which will be sent to food banks.

While the Canadian Federation of Agriculture (CFA) said it appreciates the help, it called the aid package a drop in the bucket.

“It’s discouraging to be given such a small amount,” said Canadian Federation of Agriculture president Mary Robinson.

The CFA had asked for $2.6 billion, more than ten times the $252 million the Liberals pledged.

“We have great concern about the ability of farmers to survive this,” Robinson said.

“With this whole COVID-19 thing, everything is out of flux. Pricing is all over, volatility has increased dramatically,” he said.

He is preparing to plant seeds for harvest and will sell cows in the fall. But it’s not clear if his crops and cattle will have a market south of the border.

“A lot of our cattle go down to the U.S. to be slaughtered and they’re having massive problems,” Crockatt said.

On Tuesday, Premier Brian Pallister acknowledged the problems facing the industry and said it’s up to the federal government to step up.

“We all know where the pockets are deeper, we have done some of our job by raising the issue with Ottawa,” said Pallister. “I have certainly raised the issue on our calls with the prime minister and deputy minister.”

Trudeau said he is prepared to commit more money to aid the agriculture sector.

“This is an initial investment. And if we need more, we will,” he said.