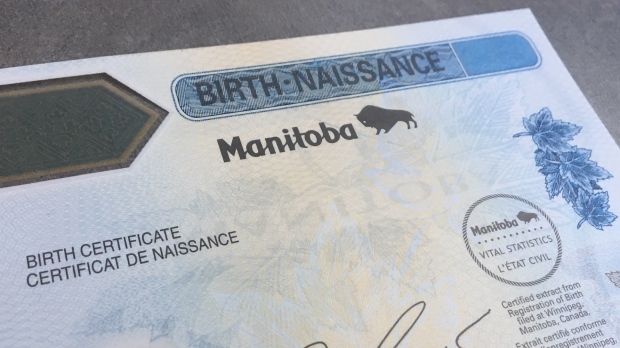 WINNIPEG — Manitobans will soon have a non-binary gender option on birth certificates.

The province is allowing the third option in addition to “male” or “female” on official birth documents.

The Progressive Conservative government says people will also have the option of not selecting any sex designation on birth and death certificates, once a bill currently before the legislature is passed into law.

Last November, a human rights adjudicator ordered the province to pay $50,000 to a transgender individual, who wanted the sex designation on their birth certificate replaced with an “X” but was denied.

The complainant, who was identified as T.A. because of a publication ban, filed a complaint with the Manitoba Human Rights Commission after the request was turned down in 2014.

The independent adjudicator who heard the case, Dan Manning, ruled that the government’s actions were discriminatory and gave the province six months to start offering a third designation.

“In response to a ruling from the Manitoba Human Rights Commission, the Vital Statistics Agency is implementing policy changes to be more inclusive to Manitobans,” Finance Minister Scott Fielding said in a news release Monday.

Some other provinces have already adopted gender-neutral identity documents.

Nova Scotia, Ontario, Alberta and Newfoundland and Labrador allow people to choose “X” as a gender indicator — or to not display any gender — on birth certificates, driver’s licences and other documents.

This report by The Canadian Press was first published April 27, 2020