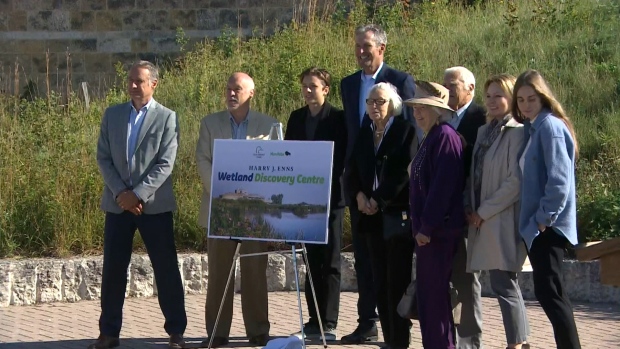 WINNIPEG — The Oak Hammock Marsh Interpretive Centre has a new name, as well as a $6 million endowment.

The Manitoba government, along with the Interlake Community Foundation, established this new endowment, which builds on the $1.5 million the province gave to the centre earlier this year to support upgrades at the facility.

“(The interpretive centre) is a great place for Manitobans, as we know, to get outdoors, to experience our rich wildlife heritage in a real way,” said Premier Brian Pallister at a news conference on Thursday, Sept.10.

He added the centre is one of the province’s most popular wildlife management areas and it “attracts more than 100,000 visitors every single year.”

Pallister noted the province’s contribution will annually generate about $270,000 for the centre, which is a 20 per cent increase over the previous provincial operating grant.

“This endowment will replace the annual operating grant that used to support the Oak Hammock Marsh Interpretive Centre, which as we know with government grants could come, could go, could fluctuate and was a source of constant dialogue, I expect, between many at Ducks Unlimited and the Government of Manitoba,” he said.

Pallister said the new endowment ensures the funding for the future of the centre.

“For three decades, this facility has created a wonderful opportunity to connect with the nature that is so abundant in our province,” the premier said.

“The funding announced today ensures that this important interpretive centre will continue to do so for decades into the future.”

As part of a renewal, Ducks Unlimited Canada also announced the interpretive centre has been renamed to the Harry J. Enns Wetland Discovery Centre.

This new name honours the legacy of local conservation champion Harry J. Enns, who was a Member of the Legislative Assembly from 1966 to 2003 and championed the development of the interpretive centre.

“Harry was a champion for what this place could become,” said Karla Guyn, CEO of Ducks Unlimited.

“He was a strong advocate for outdoor education and connecting people to the role that natural areas played in their lives. He believed in the vision of Oak Hammock Marsh and with the support of many others, who saw the power and potential, helped make that vision a reality.”

Andrew Enns, Harry’s son, said his dad would be humbled and proud.

He said the interpretive centre was a highlight of his father’s long career.

“He was a passionate believer in the project from the beginning,” Andrew said, noting his father knew it would be a controversial project, but he “never shied from a good political fight.”

He said his father understood the “rightness” of the project, was a supporter of Ducks Unlimited and saw the interpretive centre as a vital part of the initiative.

“(The centre) provides that access to people who wouldn’t otherwise be able to experience all that goes on in a marsh or a slough or a prairie and as a result, perhaps, change behaviours in order to preserve and protect these places in the future,” Andrew said.

The interpretive centre, which is also the national headquarters for Ducks Unlimited, is located east of Stonewall, Man.