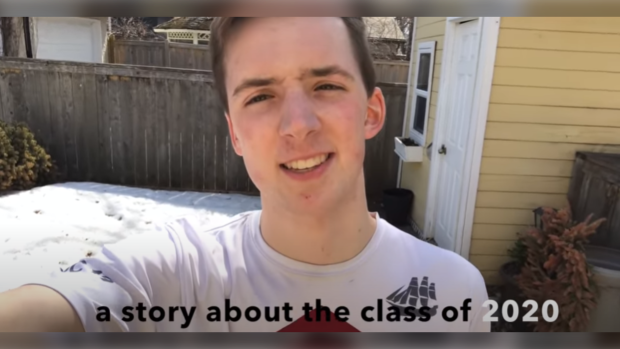 WINNIPEG — Like many Winnipeggers, students at Kelvin High School have had to adapt to life during a pandemic.

All school classes were suspended on March 23 and students have had to finish their studies online, away from their friends and fellow classmates.

But the senior class at Kelvin High School decided to make a video to show they are going to be okay despite COVID-19.

MacKinley Hall, who came up with the idea to create the video, said he got the inspiration from other videos he’s seen online, and also from the song ‘All For One’ by Five for Fighting, that eventually ended up in the video.

“I found that song and I was like ‘we have to make something about this’,” said Hall.

He said with the help of his friend Coco Diamond-Burchuk, they started contacting graduating students and eventually 70 people said they would help with the video.

In the video, students said they are a “strong graduating class” and that they have “persisted through the unimaginable.”

Hall said it took about a week and a half to make the entire video, from writing the script to putting all the video clips together.

Since the video has been posted, Hall said he has been getting a lot of positive feedback and has had several alumni reaching out.

“It’s just so awesome to see something so simple like a video can just bring people together.”

Even though the students in the video said they will get through this, Hall said having to be socially distant during the grade 12 year has been hard on him and his fellow classmates.

“As anyone who has graduated so far can say, they look forward to this their entire life, their final year, final moments. It’s been hard not to finish the year and finish your high school and schooling career with the people that you have done it with,” he said.

“We’ve been through so many ups and downs together, so it’s hard to not just see those people every day.”

He added the school still plans to have a graduation ceremony once life returns to normal later in the year.

Hall said he wants to thank each student who is graduating at Kelvin High School and he also thanked all frontline workers who have been helping people get through the pandemic.