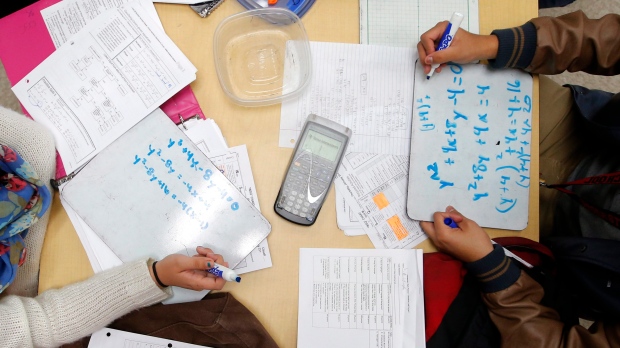 TORONTO — New research suggests that students are increasingly heading online for quick answers to their homework rather than grappling with tough questions themselves, a convenience that may have serious implications in the long run.

The research, published online last week in the journal Educational Psychology, looked at the exam scores of 2,433 post-secondary students in 12 different lecture-based courses over a decade.

In the two most recent years of the research, students who benefitted from homework reported generating their own answers, whereas students who copied their answers from elsewhere, such as online sources, did not benefit from homework.

The reason for the drop in grades has everything to do with information retention, which is lowered when students don’t do the hard work of thinking their way through a problem, according to lead author Arnold Glass, a professor of psychology at Rutgers University-New Brunswick.

“When a student does homework by looking up the answers, they usually find the correct answer, resulting in a high score on the assignment,” Glass said in a statement.

”However, when students do that, they rapidly forget both the question and answer. Consequently, they transform homework from what has been, until now, a useful exercise into a meaningless ritual that does not help in preparing for exams.”

Today’s digital landscape isn’t completely negative for students’ education. The Pew Research Center released a report in 2012 that surveyed thousands of teachers, and many reported that access to the internet provided greater access for students to delve into topics that interested them. In general, teachers described students today as self-reliant researchers, and more than three-quarters said the internet is mostly positive for students.

However, the same group of teachers raised concerns about students’ over-reliance on Google and other search engines, increased online distractions, and poor time management skills.

A South Korean study on students between grades 7 and 12 found a relationship between students grades and the amount of time spent online for academic purposes. High-achieving students spent up to two hours of their day online for study, whereas students who were online for “general purpose” saw their grades lower.