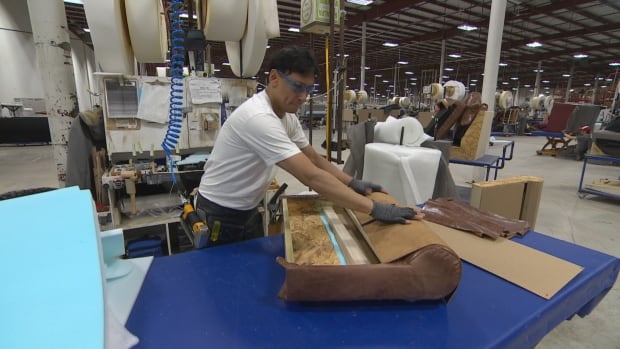 Palliser Furniture is temporarily laying off 72 per cent of its workforce as it closes its Winnipeg facility for two weeks and looks to do the same at its Mexican facilities in the coming weeks.

The company employs 3,000 people around the world. Approximately 500 factory workers and office staff in Winnipeg will be let laid off as the company shuts down in response to the COVID 19 pandemic.

“I would say it was one of the toughest, the toughest. [It’s been] weeks actually, because we had to plan for it,” said company president Peter Tielmann.

The layoffs come as the COVID-19 pandemic brings retail business to a standstill and demand for Palliser products and services plunges.

“The bottom just fell out,” Tielmann said. “Revenue went from a hundred to zero in just two weeks.

“Most retailers have closed down. Some remained open,  but really there is very little activity. Even the ones that remained open don’t have any traffic going to sales these days, which is fully understandable,” he added.

It has operations in Canada, Mexico, Indonesia and China.

In addition to its own products, Palliser is a supplier to a variety of furniture companies.

Palliser said it’s exploring workshare along with additional assistance programs for employees affected by the layoffs.

Tielmann said the federal programs not only have to support businesses trying to get back on their feet and workers back in their jobs, but provide confidence to everyone to start purchasing products once again.

Tielmann says the federal Liberal government has made some good moves to support the economy but needs to move quickly to put the programs it has announced into action.

“I think speed is up speed is of the essence. We need to act really fast because this crisis like unlike any other before,” Tielmann said.

Lodge operators across Manitoba are in a dire situation.

“COVID-19 is slamming the economic life out of Manitoba’s tourism industry, especially our lodges and outfitters, who are primarily small, family-owned businesses,” said Brian Kotak, executive director of the Manitoba Lodges and Outfitters Association.

Kotak said a recent survey of the industry — which attracts mostly hunters and fishers from the Unites States — shows the pandemic will result in a massive hit to the business.

With the border to the United States shut, 60 per cent of Manitoba outfitters indicate that more than half of their booked business for 2020 is in jeopardy, Kotak said.

Lodge owners may not be able to afford to hire their regular staff this season either, he said, adding that the outlook for the future isn’t looking that bright either.

“Even once the border restrictions are gone, it will be a huge feat to convince U.S. clients to come back to Manitoba,” Kotak said.

The industry has written to the Manitoba and federal governments looking for help specific financial and regulatory assistance.

“We have not received a response yet,” Kotak said.

WATCH | Another mass layoff in Winnipeg because of COVID-19:

Palliser Furniture is temporarily laying off 72 per cent of its workforce as it closes its Winnipeg facility for two weeks and looks to do the same at its Mexican facilities in the coming weeks. 1:55