Home  »  News   »   ‘Terry is always on our mind’: Brother of Terry Fox remembers the legacy of a Canadian icon 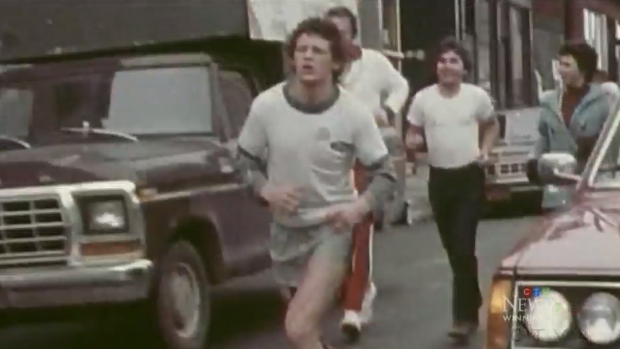 WINNIPEG — It’s been 40 years since Terry Fox’s Marathon of Hope came to an abrupt end, but his legacy is being remembered across the country.

Fred Fox, the brother of the Winnipeg-born Canadian icon Terry Fox, said it doesn’t feel like it has been four decades since his brother attempted to run across the country to raise money for cancer research.

Terry Fox was forced to end his run in Thunder Bay, Ontario on September 1, 1980.

“Terry is always on our mind and people across Canada are always thinking about Terry and supporting what he started during his Marathon of Hope,” Fred told CTV’s Renee Rodgers.

He said when Terry, who was 18-years-old at the time, was diagnosed with cancer in 1977, he was told he had 20 to 50 per cent chance of surviving. He was also told he would have to have his right leg amputated above the knee.

In the years since Terry’s Marathon of Hope, the Canadian government said more than $800 million has been raised for cancer research.

“Terry faced all kinds of challenges along the way – you know being diagnosed with cancer first, and then making that effort of running across Canada – he was challenged every day, faced the challenges and was very determined,” Fred said.

“What kept Terry going 40 years ago today was those people lined up on the highway in that last mile, cheering him on and encouraging him to keep going. That is what Canadians have been doing for 39 years, and that is what they are doing this year.”

The memories and stories of Terry Fox are being remembered in a new book ‘Forever Terry: A Legacy in Letters’ which was released on Tuesday – 40 years to the day since Terry’s run across Canada ended.

One of those contributors is John Kearsey, the vice-president of external relations at the University of Manitoba, who said Terry Fox has had a huge impact on his life.

“There were all kinds of TV heroes that we saw like the Bionic Woman and the Six Million Dollar Man, but on a newscast one evening came this new hero for me,” Kearsey told CTV News. “I saw this guy dip his leg into the Atlantic Ocean and start running through the City of St. John’s.”

Kearsey received the Terry Fox Humanitarian Award in 1985, and is now the chair of its board of directors. He said he received a call from Terry’s family, asking if he would contribute to the new book.

“Because Terry has been such a monumental part of my life, a part of what inspired everything I do and continue to do – I had a lot to say, but nothing probably as compared to the many other incredible names and contributors to ‘Terry Fox Forever’,” he said.

The 2020 Terry Fox Run is scheduled to take place virtually on Sunday, September 20.