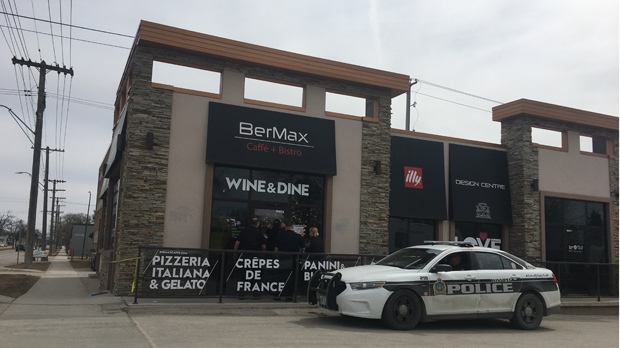 A close friend said the owners of BerMax Caffé and Bistro are still recovering from an anti-Semitic act at their restaurant Thursday – one day before the start of Passover.

“Taking time to heal. From what we’ve been told, the attack was quite traumatizing. They aren’t online because of the holiday, so they aren’t aware of the fundraiser yet,” said Les Kiesman in an email to CTV News on Monday.

Winnipeg police say a woman who was working was assaulted and the restaurant was severely vandalized and likely the target of a robbery. A hate crime investigation is underway.

No arrests have been made and no one is in custody, police said Monday. Officers haven’t said whether video footage is part of the investigation.

Kiesman runs a Jewish LGBTQ organization next to the restaurant and holds events at BerMax.

“At this point, our organization is in limbo. All our events are on hold until we know what’s happening,” he said.

“I don’t know what we’ll do if BerMax closes its doors. All we can do is hope for the best right now.”

Kiesman said they hope to show the same love and support the owners have shown them.

On Friday the group started an online fundraiser to help the owners. https://www.gofundme.com/bermax .

The group is also organizing a cleanup and repair effort with members of the LGBTQ community.

“There are certainly bound to be expenses that can’t be recuperated by insurance, so our hope is that any money raised can help lessen that financial burden,” said Kiesman.

“Without BerMax we lose a safe space for our community. It’s important for us that people recognize the importance of BerMax to the LGBTQ community. Without that space, many people in our community would not have a home to express their religion, culture.”

Several other initiatives are underway to help the owners, including an interfaith vigil Thursday evening.