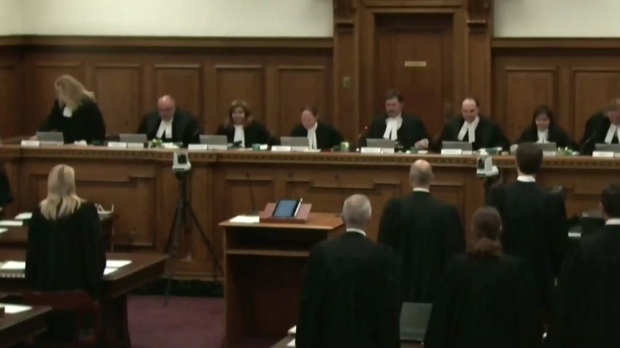 The high court sided with British Columbia’s francophone school board, at least in part, in a dispute over French-language education in the province, saying lower courts interpreted constitutional protections too narrowly.

“We now hope that the provincial governments will step up further in areas that are their exclusive jurisdictions, like education and certain services for minority-language communities,” Trudeau said Friday at his daily media briefing.

One legal analyst said the ruling broke new ground on liability that could open the door to compensation when government policies violate other charter rights.

The court case began a decade ago when the board, Conseil scolaire francophone de la Colombie-Britannique, and the parents of students alleged the province had breached a Charter of Rights and Freedoms provision guaranteeing minority-language education.

They sought orders requiring the province to change how it funds French-language education, fix problems with inadequate facilities in a number of communities and offer compensation for its failure to provide proper funding.

After a long trial, the school board and parents won a partial victory, including an award for charter damages arising from unpaid student transportation costs.

However, they appealed the ruling on various points, primarily the conclusion they were not entitled to millions of dollars in educational capital projects they had requested.

The B.C. Court of Appeal dismissed the challenge and allowed the province’s cross-appeal, saying the trial judge should not have awarded the transportation costs given the traditional principle of government immunity.

In writing for a majority of the court, Chief Justice Richard Wagner said the courts below had “adopted an inordinately narrow interpretation” of section 23 of the charter, which enshrines the right of citizens from English and French linguistic minorities to have their children taught in their language when the numbers warrant.

The decision clarifies the series of steps to be followed in determining the practical effects of the constitutional protections.

In applying these principles to the B.C. case, the high court said the board and the parents were entitled to eight French-language schools in various communities the lower courts had denied them.

The court said the children who have the right to attend the board’s schools or participate in its programs are entitled to an educational experience “that is substantively equivalent” to the experience at nearby majority-language schools.

In addition, it restored the trial judge’s order concerning school transportation, awarding $6 million in charter damages to the board to make up for 10 years of inadequate bus funding. It also approved another $1.1 million in damages to compensate for grant monies denied to the board.

In adopting section 23, the architects of the charter aimed to ensure that vulnerable minority groups were endowed with the institutions and rights necessary to maintain and promote their identities, Wagner wrote.

“By doing so, they definitively closed the door on language policies that would prevent instruction in the language of a minority, and chose an approach that favoured the promotion and development of minority language communities across the country.”

The section is intended not only to prevent the erosion of official language communities, but also to redress past injustices and promote the development of those communities, meaning the courts “have a crucial role to play,” he added.

“Many rights that have been granted to Canada’s minorities were dearly won over many years, and it is up to the courts to give full effect to them, and to do so clearly and transparently.”

The Supreme Court deemed the B.C. government’s freeze on school transportation funding to be a policy that violated the charter minority-language guarantee, noted Errol Mendes, a law professor at the University of Ottawa.

“If the court is now inviting charter actions that claim certain government policies are violating other charter rights, this could open the gates to some significant possible liabilities,” he said.

Examples could include federal policies on child welfare funding on Indigenous reserves, or provincial policies concerning similar caps on special education and autism programs, or “the appalling situation” now seen in long-term health-care facilities, he said.

The appeal was heard in Winnipeg last year.

This report by The Canadian Press was first published June 12, 2020.