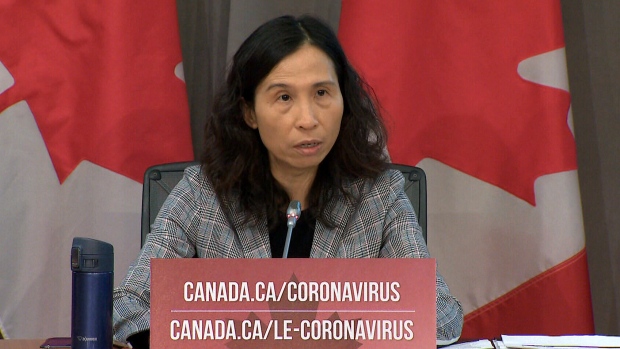 OTTAWA — With strong public health measures, between 11,000 and 22,000 Canadians could die from COVID-19 in the months ahead, though the death rate could be much higher with poor containment measures, federal modelling shows.

Federal models released by Health Canada show that if 2.5 per cent of the population contracts the virus, 11,000 people could die, but if that case count doubles to five per cent, 22,000 deaths are projected.

The number of Canadians that could contract the virus and die increases drastically, the weaker the containment efforts are, the various national scenarios show.

The agency cautioned that in the absence of a treatment or vaccine, the fight against the disease is likely going to require waves of epidemic controls, spanning months.

The short-term federal projection on the spread of COVID-19 shows that between 500-700 Canadians could die from COVID-19 in the next week, with the number of cases rising to between 22,580 and 31,850 cases.

The projected total numbers of deaths in Canada vary widely based on the impact of public health measures in place. For example, with no control efforts in place, up to 80 per cent of Canadians could contract the virus.

Also playing a factor in the scenarios is the increase in health care capacity, from stocking up on lifesaving supplies like ventilators, to having enough workers able to respond to the surge of patients.

Prior to physical distancing and other steps being taken, Health Canada estimates that each infected person in Canada passed the repertory disease on to more than two people on average, but that has since been decreased, but we have not yet reached the point of stopping all spread. Chief Public Health Officer Dr. Theresa Tam called the numbers “stark” but cautioned that these possible scenarios are imperfect given the different regional epidemics, and the outcomes will ultimately be determined by Canadians’ actions.

Federal officials are briefing reporters on the data and modelling that is informing the current national public health measures in place to combat the spread of the novel coronavirus.

Several provinces have already released their best- and worst-case projections for the number of deaths and cases, as well as how long they estimate it will take to contain the virus that’s already infected nearly 19,300 Canadians and killed 435 people nationwide.

Prime Minister Justin Trudeau will speak to these projections during his daily address at 11:15 EDT. On Wednesday, he said to expect that even when Canada begins returning to normal, it still won’t be normal.