Home  »  News   »   Stray piglet spotted in Winnipeg may have been an illegal pet: Animal Services 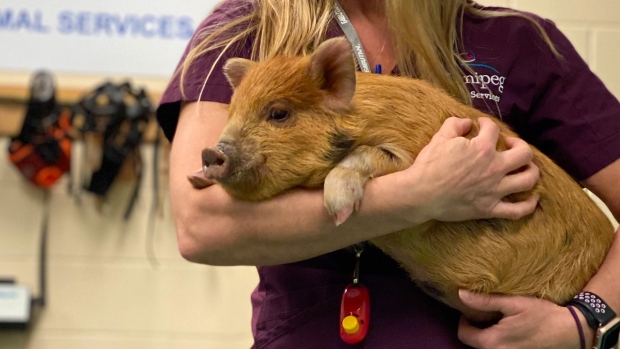 WINNIPEG — Animal services is searching for the owner of a stray piglet spotted in northwest Winnipeg on Saturday, who officials say may have been kept as an illegal pet.

Crews from the City of Winnipeg’s Animal Services found the female piglet roaming around a green space near Leila Avenue, but officials say it’s a mystery how it got there.

Gordon said the light brown pig is anywhere from two to three months old, and will grow up to 180 kilograms, or 400 pounds.

Gordon said the piglet is in good health and is being well taken care of.

“We’ve been giving it specialized pig food, fruits and vegetables and biscuits (and) lots of love. We’re all hoping for a positive outcome.”

Gordon said if the owner does come forward, they will likely get a ticket.

“People need to be sure when they go out and get a pet that they follow responsible pet ownership by-laws,” he said. “People need to understand what kind of pets they can own in an urbanized setting like Winnipeg.”

“Animals like pigs, goats, donkeys are illegal in Winnipeg (as pets),” said Gordon. “Most major cities don’t allow people to keep livestock as pets in their homes.”

Gordon said he isn’t expecting the owner to surface, but several new homes for the baby pig are already lined up. “It’s been several days since we’ve heard anything. We’ve already got really good homes outside Winnipeg. People are rooting for the pig.”