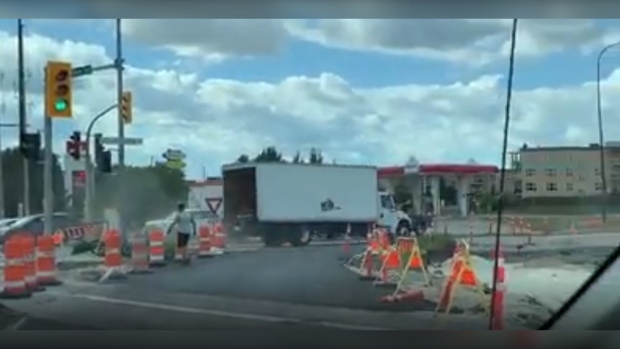 WINNIPEG — Winnipeg police officers engaged in a high-speed chase on Sunday evening after a five-tonne box truck was stolen from a business.

Police said they responded to a commercial break and enter around 4:30 p.m., in which the box truck was taken.

Officers chased after the stolen truck and tried to use a stop stick to deflate the vehicle’s tires, but abandoned this plan as the truck was being driven erratically.

One witness told CTV News he saw police cars driving towards Bishop Grandin from Fermor Avenue, as well as a box truck heading north on Lagimodiere.

“It was a hot pursuit, there was about five or six police cruisers chasing the box truck at a high-rate of speed, around 90 kilometres and hour I’d say, and it plowed through a bunch of barricades,” the witness said.

Police said the truck was later found abandoned and they are investigating the incident.

Police did not provide details on the location of the break and enter or where the truck was found.