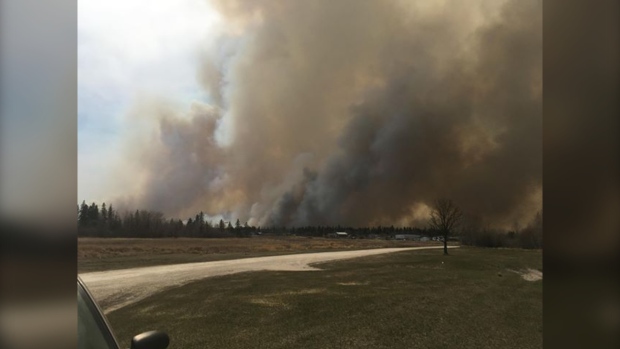 PINE CREEK FIRST NATION — Communities in Manitoba’s Parkland region are being threatened by a wildfire continuing to burn out of control, prompting one First Nation to declare a local state of emergency.

Flames, scorched grassland and smoke billowing around homes along a road on Pine Creek First Nation have left residents on edge.

“In the back of our house, it’s still smoky. It’s been smoky right through since Sunday,” said Danita Mekish, who lives in Pine Creek with her husband. The couple has packed their bags and valuables in case the fire moves closer.

The community’s located along the western shores of Lake Winnipegosis about 430 kilometres northwest of Winnipeg.

Crews have been fighting the fire surrounding Pine Creek and Camperville, Man. since Sunday but warm, windy weather is making their job a challenge.

The province said the fire covers about 10,000 hectares of land but within that zone lies several large sections of swamp.

In Pine Creek, helicopters and water bombers are buzzing over the community providing support to crews trying to contain and put out the fire from the ground.

Flames Tuesday night prompted people living in 14 homes near Mekish’s place in the western part of the First Nation to self evacuate and stay with friends. Those homes were saved and some people have started to return to them while others have decided to stay away.

With classes suspended due to the pandemic, The Manitoba Office of the Fire Commissioner and members of Manitoba’s Wildfire Program have been using the community’s school as a command centre.

Pine Creek Chief Karen Batson said dealing with the situation during COVID-19 has been a challenge.

“It is a stressful time,” said Batson. “We also are trying to access some mental health services with having COVID-19 as well.”

To further support the community during the fire, Batson said chief and council in Pine Creek declared a state of emergency to bring in more resources but what they really need is rain.

“Things can change fairly quickly,” said Batson. “So that’s why we have to have our community members on alert, have bags packed in case they have to leave quickly we can get them out of the community and to safety.”

“It’s not over,” said Klyne. “You can still see a lot of dried grass in the area, fields of dry grass, the beach is all grass and we’re scared that’ll start up again.”

This is leaving people in the area anxious and uncertain.

About 50 homes in Pine Creek were also evacuated Sunday. People went to nearby Dauphin, Man. to stay in hotels for one night before returning home the next day.

Officials said the fire was started by people but the exact cause hasn’t been released.

One home and two sheds in Pine Creek have been damaged.

The fire also knocked out 11 hydro poles but Manitoba Hydro is working to keep the electricity flowing to communities in the area.