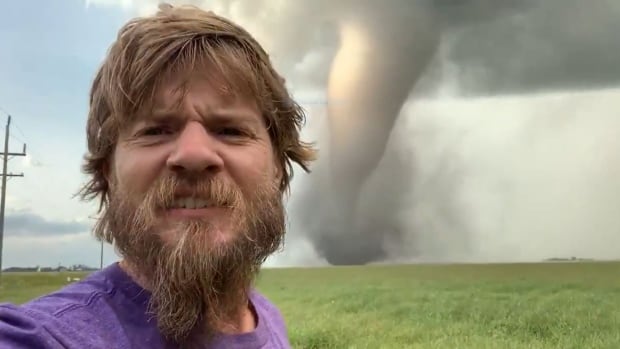 STARS air ambulance has been dispatched to the Virden, Man., area, after a tornado touched down on Friday evening.

Environment and Climate Change Canada was tracking a severe thunderstorm that produced a tornado near Scarth, Man., which is 13 kilometres south of Virden and nearly 275 kilometres west of Winnipeg, at 8 p.m. CDT.

STARS was dispatched shortly after 8:30 p.m., according to its Twitter account. CBC News has contacted STARS for more information but has not yet heard back.

The funnel cloud was documented and posted to social media by several people in the area, including storm chaser Aaron Jayjack, who shot video of himself standing in front of the twister as it touched down.

Social media posts from storm chasers are also saying that vehicles were tossed around by the tornado, and that there are downed power lines which is making the recovery difficult.

Environment Canada said the thunderstorm was rotating southeast at 30 km/h toward Oak Lake Beach and Deleau, communities within the Rural Municipality of Sifton.

But it appears the threat of tornadoes has subsided for now. At 9:12 p.m. Environment Canada updated its weather warning for the Virden-Souris area.

The following communities should look out for a severe thunderstorm:

Environment Canada says conditions are favourable for thunderstorms that are capable of strong winds, large and heavy rain.

In the event a tornado does occur, Environment Canada advises people to move indoors, go to the lowest floor in their homes and stay in a room away from outside walls and windows, such as a basement, bathroom, stairwell or interior closet.

People should leave mobile homes, vehicles, tents and trailers and move to a strong building if possible. Worst case scenario, people should find a low spot and protect their heads from flying debris.