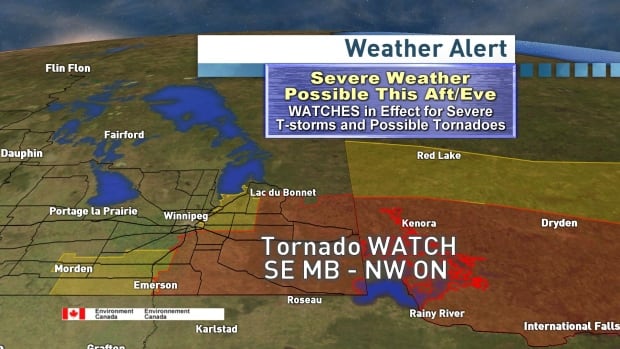 A tornado warning issued for part of southeastern Manitoba Monday afternoon has ended.

Environment Canada issued the warning just after 4 p.m. It was lifted after 5 p.m.

A severe thunderstorm warning in effect for Buffalo Point Reserve, Northwest Angle Provincial Forest and the rural municipality of Piney including Sandilands and Sprague was lifted just after 6 p.m, the weather agnecy said.

Much of the area was placed under a tornado watch Monday afternoon amid stormy conditions in parts of southern Manitoba.

In online weather alerts, Environment Canada issued tornado watches because the weather conditions were looking favourable for the development of severe thunderstorms that could produce tornadoes.

Tornado watches in effect for:

The storms have the potential to produce hail larger than the size of golf balls and wind gusts of more than 110 kilometres per hour, Environment Canada said.

Severe thunderstorm watches in effect for:

In the event of a tornado, or if a tornado warning is issued, people in the area should go inside to a room on the lowest floor, away from outside walls and windows, Environment Canada says.

Do not seek cover in free-standing shelters like cars, trailers or tents, and instead move to a strong building if possible. As a last resort, lie in a low spot and protect your head from flying debris.