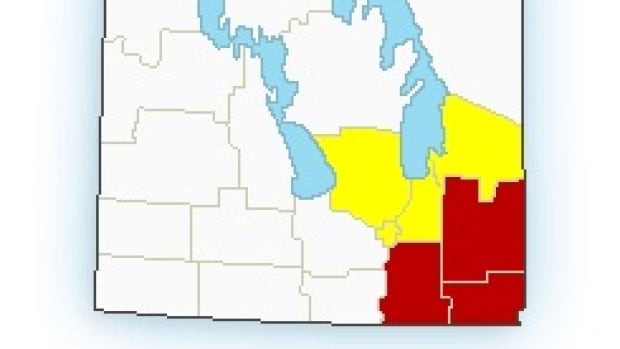 A severe thunderstorm warning has been issued for the southeasternmost part of Manitoba.

In an online weather alert, Environment Canada said meteorologists were tracking a severe thunderstorm as of 5:14 p.m. that was capable of producing very strong wind gusts, up to toonie-sized hail and heavy rain.

There is a line of severe thunderstorms stretching from La Broquerie to Tolstoi and moving east at 30 km/h, Environment Canada said.

A watch was also issued for Winnipeg and parts of southern and southeastern Manitoba earlier Saturday.

Along with the City of Winnipeg, the watch also includes:

A low pressure system is triggering storms that may be capable of producing strong wind gusts, up to large hail and heavy rain. Some of these thunderstorms may become severe, the alert said.

Winnipeg is expected to reach a high of 22 C on Saturday with a few showers expected through the afternoon.

The normal high for this time of year is 24 C.