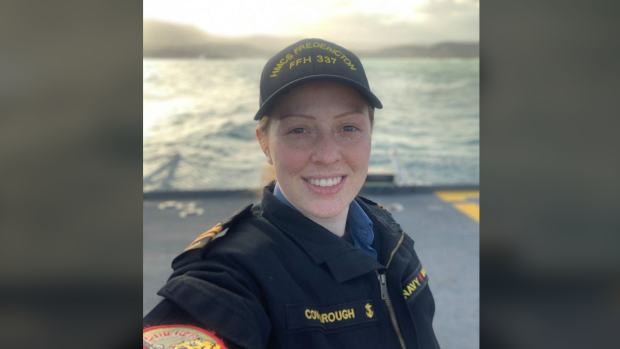 TORONTO — Six members of the Canadian Armed Forces were on board the military helicopter that crashed during a NATO training exercise off the coast of Greece, the prime minister has confirmed.

During his daily briefing in Ottawa Thursday, Prime Minister Justin Trudeau said that one body has been recovered and five others are missing.

“All of them are heroes. Each of them will leave a void that cannot be filled,” he said. “On behalf of all Canadians, I want to offer my deepest support to their families, their friends, their shipmates, and their fellow CAF members.”

“This is another very hard day for Halifax, for Nova Scotia, and for our Armed Forces families. I am so very sorry for your loss,” he said.

The prime minister was joined by Chief of the Defence Staff Gen. Jonathan Vance who said they had confirmed the death of one sailor, Sub-Lt. Abbigail Cowbrough of Nova Scotia. He said her body had been recovered and they were still searching for the others who were on board the helicopter.

“This is a time of agony for all families, friends and fellow crew members. There is nothing worse than sending your shipmates over the horizon and losing contact,” he said.

Vance added they are not releasing the names of the missing CAF members.

“To those of you in agony awaiting the word on the fate of their missing loved ones, we stand with you and are searching as hard as we can,” he said.

In a brief statement released Thursday, NATO said that aircraft from Canada, Italy, and Turkey were carrying out search operations for the helicopter with additional support from Greece and the U.S.

Defence Minister Harjit Sajjan said the cause of the incident is unknown at this time. He said the voice and data recorders from the helicopter had been recovered and would be transported back to Canada for the investigation.

Vance said approximately 240 CAF members who left Halifax in January, to take part in NATO’s Operation Reassurance, had just completed their 100th day of the mission. They are expected to return to Canada in July.

According to NATO, HMCS Fredericton recently sailed from Souda, Greece to continue with its mission of “maritime situational awareness” in the Mediterranean.

The ship had been a unit of Standing NATO Maritime Group Two (SNMG2) and had performed several exercises with units of the Turkish Navy and the Hellenic Navy and Air Force this past week, NATO said in a statement Thursday.

Prior to that, the ship visited Italy in March, before it was to travel to Greece and the Black Sea as one of eight warships in SNMG2.

Mitsotakis added that he intended to call Trudeau to extend his sympathies.

The helicopter carrying six CAF members had just completed a training exercise and was flying back to the ship when it lost contact at approximately 6:52 p.m. local time on Wednesday and flares were launched, Vance said.

The chief of the defence staff said a military flight investigation team would be deployed to the area where the crash occurred on Thursday or Friday.

As a result of the crash, Vance said the Cyclone helicopter fleet was on an “operational pause” to allow flight safety teams to investigate and rule out any potential fleet-wide problems.

Earlier on Thursday, the family of the first victim identified in the crash, Sub-Lt. Abbigail Cowbrough, shared news of her death on social media.

“I am broken and gutted,” he wrote. “There are no words. You made me forever proud. I will love you always, and miss you in every moment. You are the bright light in my life taken far too soon.”

“My beautiful daughter has been in a military accident and passed away. She will no longer pipe her songs to all those that love her,” she wrote. “The very beating no fluttering of my heart has stopped. Nothing can replace her.”

The church also shared two photos of Abbigail Cowbrough. In one, she can be seen playing the bagpipes during a Remembrance Day ceremony in Dartmouth last year. The other photo shows Abbigail Cowbrough aboard HMCS Fredericton, which she sent to the church to show them where she was spending quarantine during the pandemic.