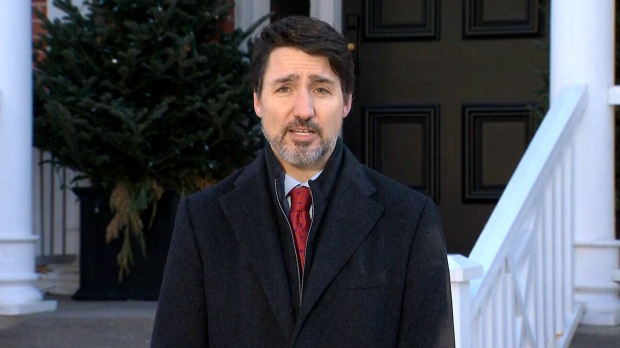 OTTAWA — Prime Minister Justin Trudeau says the federal government is “not taking anything off the table” when it comes to additional measures to combat the spread of the COVID-19 pandemic in Canada, like shutting down the border to international travellers and implementing mandatory self-isolation.

Those two possibilities are being discussed on Sunday when the federal cabinet holds a rare weekend meeting, amid the ongoing pandemic that’s seen the shutdown of many aspects of Canadian society in recent days.

“We’ve taken some very strong measures, and we are not taking anything off the table, we are looking daily at next steps that we might take, or we shouldn’t take and those conversations continue,” Trudeau, who is in self-isolation at Rideau Cottage, said in an exclusive interview with CTV’s Question Period on Sunday.

The question of stricter border measures to limit or completely restrict any international travel to Canada, whether at an airport, port, or land border crossing, has been bubbling for days.

Trudeau said that so far the evidence hasn’t shown a need to do so, but that given people’s concerns and “the shift in posture from the United States” that it gives the federal government “significant things to think about.”

So far the government and some public health authorities have been advising Canadians returning to Canada from any international destination to take it upon themselves to self-isolate for 14 days and self-monitor for symptoms of the novel coronavirus.

Now, Trudeau says a mandatory enforcement of a 14-day isolation could be coming.

“We are considering everything. There is nothing we have taken off the table, we are in close discussions with public health experts to look at what is the best way to keep Canadians safe. And every step of the way we have, and we will do, the things necessary to keep Canadians safe,” he told CTV Question Period host Evan Solomon.

The first case of COVID-19 in Canada was confirmed on Jan. 25, 2020, after a man travelling from Wuhan, China, tested positive for the coronavirus. Travellers from other countries have also tested positive. As of March 14, 2020, the virus has made its way through 9 provinces, with 257 cases reported.

Over the weekend there have been reports of crowded airports and limited cautionary information being delivered to Canadian travellers returning home, after Foreign Affairs Minister Francois-Philippe Champagne urged Canadians to come home immediately.

Asked why there has yet to be mandatory screening for international travellers coming into Canada, or why there doesn’t appear to be self-distancing measures in place at airports, Trudeau said that new measures are coming “right now.”

Trudeau said that he’s spoken with public safety officials and the Canada Border Services Agency about this. He said that the reason for the different treatment being seen by Canadians coming back from certain locations that aren’t known novel coronavirus hotspots has been about prioritizing resources.

“We need our public health officials… focused on the communities and on the supports that they’re doing in the hospitals. At airports isn’t necessarily the best thing but there are more measures we’re looking at,” Trudeau said, citing designating certain airports that will allowed to take in international travellers as an example.

“So we can better resource them to process the passengers the right way,” Trudeau said.

Trudeau is now a few days into his 14 day self-isolation alongside his family, after his wife Sophie tested positive for COVID-19 on Thursday upon returning from a trip to the U.K.

He said that his family is “doing fine,” and that he and his three children have “absolutely no symptoms,” though Sophie has a headache and is “feeling a little under the weather but it is not worse than what would be a bad cold.”

Asked why Trudeau has not been tested for the virus, as U.S. President Donald Trump has after coming into contact with a person who tested positive, Trudeau said that he’s taking the advice of public health officials that it’s “not worthwhile to test someone who is not showing symptoms.”

Asked what the worst case scenario Canada is preparing for, Trudeau said that preparations are underway for “all scenarios,” from low spread to “maximal spread” of the virus.

He said he is heartened to see how seriously some Canadians are taking their responsibility in “flattening the curve” and reducing the potentialities of spreading the virus, and vowed that more help is coming from the government.

Last week he rolled out a $1-billion health and economic package, followed by Finance Minister Bill Morneau committing an additional $10 billion in funds being made available to businesses who are being impacted by the economic impact of the virus and consumers’ changing habits.

Trudeau said that while the weeks and months ahead will likely bring “real challenges” for Canadians, “early next week” his government will be rolling out more financial measures to support “families and workers, directly.”

During a panel recorded prior to Trudeau’s interview, both NDP health critic Don Davies and Conservative health critic Matt Jeneroux said that while the supports announced by the federal government are good initial steps, it’s unclear that it will be enough money to ensure all provinces and municipalities have the adequate level of resources as the pandemic continues to spread.

As part of the motion passed on Friday to suspend the House of Commons session until April 20, the Liberals agreed to provide regular briefings to representatives from the opposition parties on the status of federal COVID-19 response efforts.

Stock up ‘a little bit’

Asked about the fear of a supply shortage prompting Canadians to spend hours in lines stocking up with carts full of groceries and household supplies, Trudeau said that Canadians do not need to panic, as supply chains have not been disrupted.

“Yes, stock up a little bit so you don’t have to go to the store every two or three days like we usually do. But, make sure that you’re not taking more than you need because your neighbors or vulnerable people will need to access the supplies as well,” Trudeau said.

“Being reasonable and thinking about the context we’re in and not panicking about anything is going to be really important,” said the prime minister.