Home  »  News   »   ‘She has no idea what people go through’: Blue Bomber wants apology from TV host for cleft lip joke 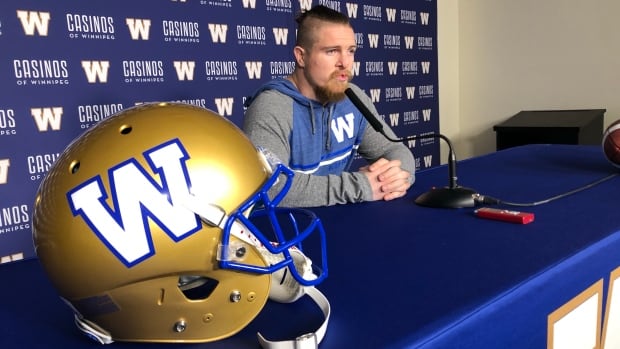 A Winnipeg Blue Bomber is speaking up against an American television show host who made fun of people with a cleft lip or palate — a common birth defect that requires surgery to correct.

While speaking about the facial features of actor Joaquin Phoenix on Jan. 7, Wendy Williams, host of the daytime TV show The Wendy Williams Show, mimicked what it looks like to have a cleft lip or palate, to the bemusement of the live audience.

Among the people chastising the show host is Blue Bombers linebacker Adam Bighill, who was born with a cleft lip and palate — as was his four-month-old son Beau. Bighill, an advocate against bullying, is posting on his social media pages until Williams publicly apologizes and makes a charitable donation.

“I was bullied growing up, so I’m used to it now as an adult … but the fact is bullying usually comes from kids who don’t necessarily know better, or know how to control their feelings or power. Wendy Williams is a grown woman … who should know how to act better.”

Bighill added that, given Williams’ large public following, the host has to realize that her words and actions will be consumed by millions of people.

“I’m sure she didn’t intend for it to be so damaging, but the fact is that she has no idea what people go through and how much this hurts people,” he said, adding that hundreds have reached out to Bighill, sharing their stories about cleft lips and palates.

The Blue Bomber said he has reached out to Williams and her show, informing her that he will be posting about her actions until she apologizes.

“Will it completely affect her life? I don’t know. I’m really just trying to be a pain in the butt enough with my influence, everyone else out there joining me,” Bighill said.

For anyone looking to support charities who help people with cleft lip or palate, Bighill suggests donating to organizations such as Making Faces in Ontario, or Operation Smile which helps provide operations for people with cleft around the world.

Candace Myers, a volunteer with Operation Smile, says Bighill is right about kids being bullied for how they look with a cleft defect.

“We see children of all ages at these missions, and the young ones … run around, they play with the other kids, they’re happy. They’re just like any other kid except they have this wide open cleft,” Myers said.

Myers said in some circumstances, families won’t even let their children outside because they don’t want others to see them.

Cleft lip and palate affects roughly one in 700 infants, though nobody knows why the defect occurs, according to Myers.

CBC News reached out to Wendy Williams for comment, but has not received a response.