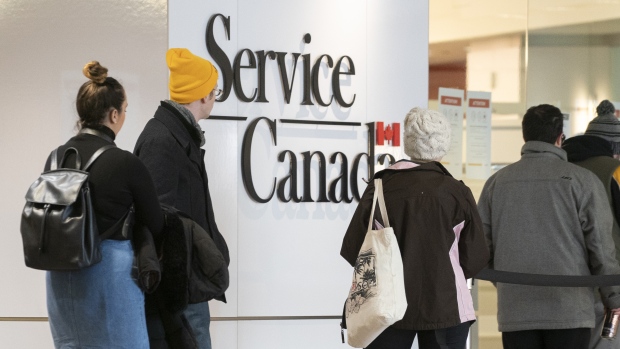 OTTAWA — The federal government is shutting down the network of in-person Service Canada centres over COVID-19 concerns.

Some of the offices, such as one tucked inside Ottawa’s city hall, have already started to close as confirmed cases of COVID-19 have increased and workers were needed elsewhere, or felt uncomfortable about going in due to health concerns.

And a new benefit for those who don’t qualify for EI but see their income dry up due to COVID-19 will be available through an online application. The web portal is targeted for opening early next month.

The minister in charge of Service Canada says officials will make alternative arrangements for those who still need personalized services — a group that tends to include seniors and Indigenous Peoples.

“During a time when we are asking most Canadians to stay home, we need to make sure our service delivery model follows the best public health advice, while also meeting the needs of Canadians,” he said in a statement.

“We recognize that this might be a challenge for some Canadians who prefer to receive services in person. I want to assure Canadians that we are committed to ensuring they all have access to the supports they need and deserve.”

Hussen said staff at the offices will instead focus on answering questions coming into call centres. Others will be available to call people directly by request to help with EI and pension applications.

“This will allow more Canadians to get the support they need, while better protecting both them and our staff,” the statement said.

The unions representing workers at the centres, who had urged the government to better protect front-line staff, did not immediately respond to a request for comment.

The network of 318 Service Canada centres, along with almost 250 more outreach centres, received about 8.4 million visits during the 12-month period between April 2018 and March 2019. The figure, noted in a recently posted evaluation of federal services, included over 1.9 million people walking in to use a self-service kiosk.

The demand on Service Canada has increased in recent days as more than one million new applications for EI benefits have arrived in just over a week as businesses close over public health concerns or requirements and let workers go.

On Wednesday, Prime Minister Justin Trudeau acknowledged the frustration many of those Canadians are feeling trying to get information about their request for financial aid, saying during his daily press briefing that civil servants were working around the clock to process claims.

He noted that workers had been deployed from other departments to bolster the ranks of those answering phones at inundated call centres.

This report by The Canadian Press was first published March 26, 2020.