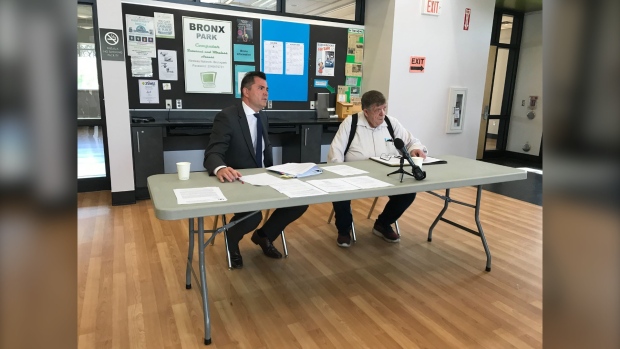 WINNIPEG — A seniors’ organization running programming for people 55 and older at Bronx Park Community Centre is suing the City of Winnipeg for allegedly breaching an agreement made regarding the management of the facility.

In a lawsuit filed Thursday in the Manitoba Court of Queen’s Bench, Good Neighbours Active Living Centre, which has 1,150 members, alleges the city breached its agreement with the group when the group received notice from the city last July that it would become a tenant or third-party user of the facility.

None of the allegations have been tested in court and no statement of defence has been filed.

The group said tenancy would mean it would have to pay $5,000 per month to lease the space, retroactive to January 2018, which it said would force the organization to shut down in two years.

That’s because it would mean paying $160,000 plus $5,000 per month ongoing, according to John Feldsted, chair of the Good Neighbours facility working group committee.

“We’re not in a position to even consider that,” Feldsted told reporters and a group of members gathered inside the centre Thursday for a media conference. “Yes, that would certainly put us in an impossible financial situation.”

Feldsted said the facility is currently funded by the city under its universal funding formula, which he said is meant to cover the maintenance and operations of the facility.

“It’s always been our position that in the event that there was a shortfall between the funding provided by the city and the actual costs, we would certainly be prepared to pick up our share of whatever shortfall there was,” said Feldsted.

Good Neighbours said aside from a $50,000 government grant, it fundraises and relies on volunteers to fund its own organization to offer 60 to 70 programs per week, including fitness classes, educational programming, and recreational programming – some of which is on hold due to the COVID-19 pandemic.

Bronx Park opened to the public in September 2009 and has a gymnasium, multi-purpose room, classrooms, a meeting room, and offices. There are also two outdoor skating rinks, a wading pool and a playground.

The lawsuit states Good Neighbours entered into a binding agreement with the city that it and the Bronx Park Community Club would be equal partners and share governance of the facility.

“Unfortunately, the promise of co-management has never been realized,” said Feldsted. “We’ve spent more than a decade trying to be recognized as a co-manager of this facility but unsuccessfully.”

The Bronx Park Community Club isn’t named as a defendant but it is mentioned in the lawsuit.

According to the lawsuit, no formal written agreement was in place until May 2014, when Good Neighbours entered into a joint-use agreement with the community club, the city, and the General Council of Winnipeg Community Centres Inc., effective Sep. 2014.

“GNALC (Good Neighbours Active Living Centre) states that city knew or ought to have known that GNALC was not, nor has it ever been a tenant or third party user of the facility and that it was agreed upon that GNALC would be a co-equal partner with BPCC (Bronx Park Community Club) and would share governance over the facility,” a portion of the lawsuit states.

The lawsuit states the name of the Good Neighbours organization is on the building and that the city initiated discussions with the group in 2002 that it move to the new facility and work with Bronx Park Community Club on sharing governance and operations at the facility.

“This was clearly, in our view, to be a partnership amongst Good Neighbours and Bronx Park Community Club,” said Kenneth Muys, the group’s lawyer. “That’s the fundamental point here – is that it was supposed to be a partnership.”

CTV News has reached out to the City of Winnipeg and Bronx Park Community Club for comment.