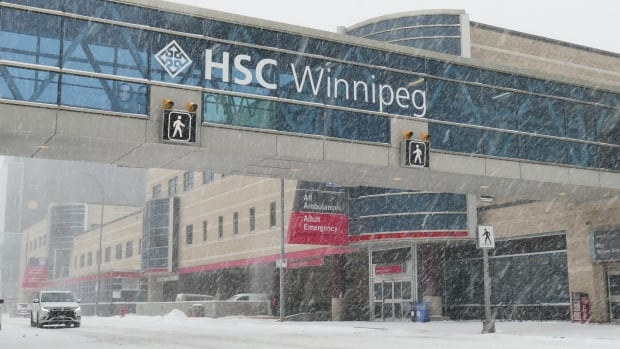 Security officers at Winnipeg’s Health Sciences Centre have been involved in at least two incidents where they had to physically restrain presumed COVID-19-positive patients to keep them from leaving the hospital, according to the union that represents the security personnel.

The first incident, which occurred March 27, involved six security officers, said a spokesperson for the Canadian Union of Public Employees.

“Security guards were called to a patient who was trying to leave the facility, which happens, I think, more than we realize,” said Shannon McAteer, health care co-ordinator for CUPE Manitoba, which represents security officers at HSC.

“They attended, they got the patient and they brought them back in. It was after the fact that they were told that the patient was COVID-19-positive.”

The officers were not wearing personal protective equipment when they responded, McAteer said, so they all had to self-isolate at home for two weeks following the incident.

About a week later, security was called again to stop a presumed COVID-19-positive patient from leaving. That incident involved four staff, according to McAteer, but this time, they were given a heads up that they should wear personal protective equipment.

“[The incidents are] unfortunate and sadly they’re kind of a part of everyday life as a security guard at one of our major facilities here in Winnipeg,” she said, adding that to her knowledge, no security officers have tested positive for COVID-19.

“So definitely, we want the PPE for the staff so that they are protected, and they’re protected from possibly spreading the COVID-19.”

Since the first incident, Shared Health has issued a directive that HSC security staff must wear personal protective equipment at all times, including, at the very least, goggles and a mask.

Share Health also says when calling for help or during a Code White — a violent incident — HSC staff must advise security if a patient is potentially COVID-19-positive.

Hospital staff will attempt to verbally convince COVID-19 patients to stay, according to a Shared Health memo, but security staff are no longer allowed to touch a patient to stop them if they want to leave against medical advice.

Instead, hospitals will call the provincial chief public health officer to request a public health order. After that’s obtained, police can be contacted to have the patient return to the hospital.

A Winnipeg police spokesperson declined to comment on the involvement of officers in these orders, citing privacy concerns.

Security staff are able to use as much force as reasonably necessary to restrain a patient from leaving once an order is in place, according to the Shared Health memo.

McAteer said the directives, and the work the health authority has done to ensure staff have access to personal protective equipment, are “steps in the right direction.”

A spokesperson for the province said two such public health orders have been issued so far under Section 43 of Manitoba’s Public Health Act, which allows a medical officer to intervene to ensure a patient with a communicable disease seeks treatment, stays away from the public, isolates or takes other protective measures.

“It was somebody who was high-risk for having COVID-19. The test result was not back,” he said.

“They indicated that they were going to leave hospital and not self-isolate, so it was the decision of the medical officer of health to issue the communicable disease order, and those people complied until the result was back.”

In both cases, the test results were negative, Roussin said, and the patients were then able to leave the hospital.

In a statement, a Manitoba Public Health spokesperson wrote that the department cannot provide details on the dates of incidents, as that could result in the release of personal health information.

The spokesperson did say, though, that orders can be written within an hour and can be issued orally if necessary.

Overall, the risk of COVID-19 to security officers is low, according to the owner of one security company.

“It changes the way we do our job but it doesn’t change the job,” said Colin Harris, owner of Toro, whose security staff have been brought in to screen visitors at the HSC entrances for the duration of the pandemic.

He said it’s crucial that security staff ensure they use personal protective equipment and follow all precautionary measures, such as frequent hand-washing.