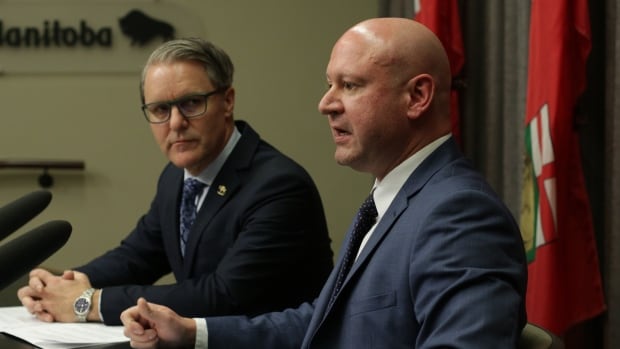 Seventy-two new cases of COVID-19 were announced in Manitoba on Sunday, shooting past the province’s previous record of 42 new cases set Saturday, the province said in a news bulletin.

There are now seven cases linked to an outbreak of COVID-19 at the Bethesda Place personal care home, with staff and residents affected, the bulletin said.

Forty-five of the new cases are in the Prairie Mountain Health region, which will see amped-up restrictions starting Monday.

Case investigations suggest most of the cases in the Prairie Mountain Health region are linked to intentional testing done in known clusters in what the province called “communal living communities.”

Manitoba health officials are set to give an update on COVID-19 in the province at 1 p.m.

On Saturday, Manitoba broke its record for the highest single-day increase in new COVID-19 cases, with 42 announced. More than half were in the Prairie Mountain Health region, which will see new restrictions in place starting Monday.

The southwestern Manitoba region is also the site of a COVID-19 cluster that had reached 66 known cases of the illness to date. Some of those cases are connected to the Maple Leaf Foods pork processing plant in Brandon.

The province did not say whether any of the new cases in the region announced Saturday are linked to a cluster or workplace.

Another 16 of the cases announced Saturday were in the Southern Health region, while two were in the Winnipeg health region. The update brought the province’s active COVID-19 caseload to 290.

Two Manitoba First Nations political advocacy groups called on public health officials to bring back a travel restriction to the north that ended on June 26.

That demand came after Fox Lake Cree Nation’s Bird reserve went into lockdown after the community said it learned a traveller in the nearby town of Gillam later tested positive for COVID-19.

Twelve people with COVID-19 in Manitoba have died, including four in recent days.