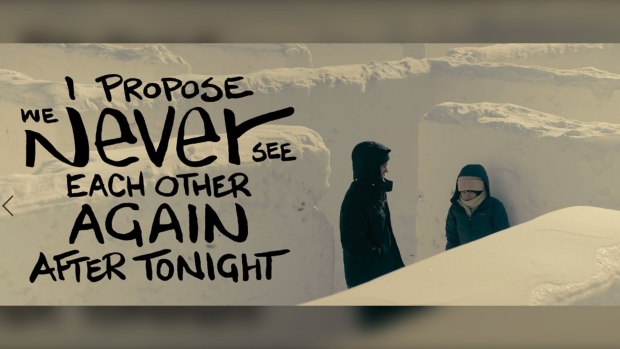 WINNIPEG — A romantic comedy, not only shot but also set in Winnipeg, is set to make its debut in local theatres on Aug. 21.

The film called ‘I Propose We Never See Each Other Again After Tonight’ is a love story between a Filipino Winnipegger and a Mennonite Winnipegger, that showcases what the city is all about.

Sean Garrity, the Winnipeg filmmaker behind the movie, said when he moved back to Winnipeg after living in Toronto he wanted to make a film that represented Winnipeg.

“The inception of the idea for the script was, ‘How can I put as many Winnipeg elements in play as possible?’ he said.

“And certainly my starting point was ‘Okay, I want to have a romantic comedy between a Mennonite Winnipegger and a Filipino Winnipegger because for me that feels very representative of the Winnipeg that I grew up in.’”

Garrity joked that the film may have even gone too far when it comes to its Winnipeg references, even featuring a wedding social in the Maples.

“There are a couple jokes that when I showed them to test audiences, they were like ‘Hmmm, is anyone going to get that joke outside of Winnipeg?” he said.

Garrity said he decided to have a diverse cast because it represented the Winnipeg he grew up in.

He added that the importance of having diversity in the film became even more evident as he made the movie, because he noticed the lack of Filipino representation in the media.

“That was something as I started to make the film and finish the film, I became more conscious of than I was at the beginning,” he said.

The movie opens at Cineplex McGillivray and Cinema City Northgate beginning on Aug. 21. It opens in the rest of Canada on Sept. 4.

– With files from CTV’s Nicole Dube.