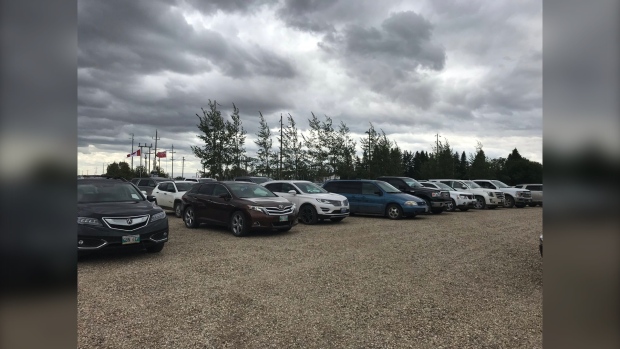 ROBLIN, MAN. — People in vehicles packed a parking lot at the Roblin, Man. Community Centre Tuesday for a town hall held by NDP leader Wab Kinew over the suspension of lab and emergency room services at the local hospital.

Standing in the box of a pickup truck, Kinew spoke to the crowd through a speaker system. People were asked to wear masks and remain in vehicles during the event due to restrictions on gathering sizes in the Prairie Mountain Health Region. The majority of people appeared to be observing the rules.

“The first thing that I know for sure is that people in Roblin and the surrounding area deserve strong, good quality health care close to home,” Kinew told the crowd, drawing a chorus of honks from the parking lot. “And by close to home, I don’t mean hour away, thirty minutes away.”

“I mean right here in town in the emergency in the health centre that you’re used to.”

Last week, Shared Health announced lab services are being suspended at the Roblin District Health Centre due to vacancies in diagnostic services elsewhere in the region.

Staff from the Roblin lab are being reassigned to Russell, Man., a 30-minute drive south of the community. It’s to help shore up the health system to serve the entire region while recruitment for lab technologists continues, according to Shared Health’s Petr Kresta.

Shared Health said it’s unable to provide a timeline for how long the suspension will last, so far only saying the priority is on hiring for vacancies in Russell before filling jobs in other hospitals.

Many residents have expressed concern over how long the suspension might drag on and the impact on residents once the ER temporarily closes Friday at 4 p.m.

One of the main concerns is the longer drive to access services in nearby communities.

Many people have pointed out residents who live north of Roblin in San Clara or Boggy Creek — home to a significant number of Métis people — will have to drive approximately one hour to access emergency room services in nearby communities or pay for an ambulance.

Roblin resident Linda Clearwater attended the rally. She said the looming suspension is scary, given the number of seniors and farmers in the community who may need to access urgent care.

“When you get to be our age, it’s important to not have to travel a distance.”

Some lab work will continue to be performed in the Roblin lab, with analysis taking place off-site.

On Monday, Health Minister Cameron Friesen said in a statement the suspension is temporary and that officials are working fast to fill vacancies.