Home  »  News   »   Return home while you can, Ottawa tells Canadians as COVID-19 continues to spread 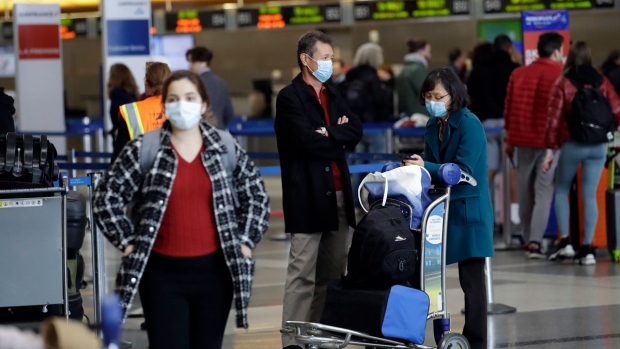 POZNAN, POLAND — The federal government urged Canadians abroad to return home while they still have a chance as countries around the world impose ever-tighter travel restrictions in a bid to curb the spread of COVID-19.

Word from Global Affairs Canada came on Saturday as Canadians travelling in Europe scrambled to book flights ahead of looming border closures in many European Union countries.

The advice marks an escalation for the government, who previously urged Canadians to cancel or postpone non-essential trips.

“Airlines have cancelled flights. New restrictions may be imposed with little warning. Your travel plans may be severely disrupted and you may be forced to remain outside of Canada longer than expected,” the ministry said in a statement.

“Find out what commercial options are still available to return to Canada. Consider returning to Canada earlier than planned if these options are becoming more limited.”

But heeding the latest advice from Ottawa might not be easy for some Canadians already feeling the effects of tightening travel restrictions.

Renata Kaniewski, of Ottawa, who travelled to Poland for her mother’s funeral, said the next available flight to Toronto offered by LOT Polish Airlines is scheduled for March 29. But she says there’s no guarantee that flight will take off thanks to the Polish government’s decision to suspend international flights and trains starting on Sunday.

“Right now I am worried about getting back to Canada, even with a new flight ticket for Mar. 29, because the government here in Poland keeps saying the international flights could be delayed even longer,” she said.

“And the news on TV here says nothing about how foreigners can get back home. They only talk about how Poland is planning to get its own people back into the country.”

Travel woes played out as the COVID-19 pandemic continued to sweep across Canada, with Ontario remaining at the epicentre of the national outbreak.

The provincial government reported 22 new cases of the disease on Saturday. Few details were immediately available, but at least six of the new cases were linked to recent travel outside of Canada.

New cases were confirmed elsewhere in the country, bringing the official national tally to 225.

Officials in Quebec reported four new positive tests in the province, prompting Premier Francois Legault to ask residents over the age of 70 to stay home until further notice.

All visitors to hospitals, seniors’ residences and long-term care facilities will be forbidden, he added. Ontario implemented a similar measure at its long-term care homes on Saturday, barring access to all but “essential” visitors described as relatives of a dying or severely ill person or the caregiver of a sick child or youth.

New Brunswick reported a new presumptive case of the virus, bringing the provincial tally to two.

Prince Edward Island also reported its first presumptive case of the virus, hours after two high-profile politicians went into self-isolation. Premier Dennis King and Health minister James Aylward both took the step after returning from trips outside of Canada, though both say they are not exhibiting symptoms.

As the number of Canadian cases related to the global outbreak kept mounting, businesses and sports organizations continued to take extraordinary steps out of what they describe as an abundance of caution and a bid to curb further transmission.

Toronto-based theatre titan Mirvish Productions announced Saturday it would be suspending performances effective immediately and lasting until at least April 12. The cancellations include performances of “Hamilton,” one of the most hotly anticipated shows of the year. Refunds will be available for affected ticketholders.

The World Curling Federation announced it would be cancelling the men’s curling world championship in Glasgow, Scotland, at which Newfoundland and Labrador’s Brad Gushue was set to compete starting on March 28.

Tech giant Apple said Saturday it is closing its stores outside of China for two weeks, including all its 29 Canadian locations. The company will continue to sell online as part of efforts to fight the viral pandemic.

The World Health Organization declared COVID-19 as a global pandemic earlier this week as cases began to spike in countries around the world.

But Canadian public health officials continue to describe the risk to the public as relatively low as they urge hygiene measures such as frequent handwashing and social distancing.

Most people diagnosed with COVID-19 experience mild or moderate symptoms, such as fever and cough, and the vast majority of those who contract the virus recover. The Public Health Agency of Canada says the risk to the general population is low.

However, for some, including Canadians aged 65 and over, those with compromised immune systems and those with pre-existing conditions, the illness can be much more severe. Among the Canadians diagnosed with the illness so far, fewer than 15 per cent have required hospitalization.

The growing number of cases has prompted widespread closures of schools and universities, mass cancellation of large-scale events, multimillion-dollar economic stimulus packages from governments, and the suspension of the Parliament until April 20.

This report by The Canadian Press was first published March 14, 2020.

We recommend that Canadian travellers return to Canada via commercial means while they remain available. pic.twitter.com/f8DC5goS3n