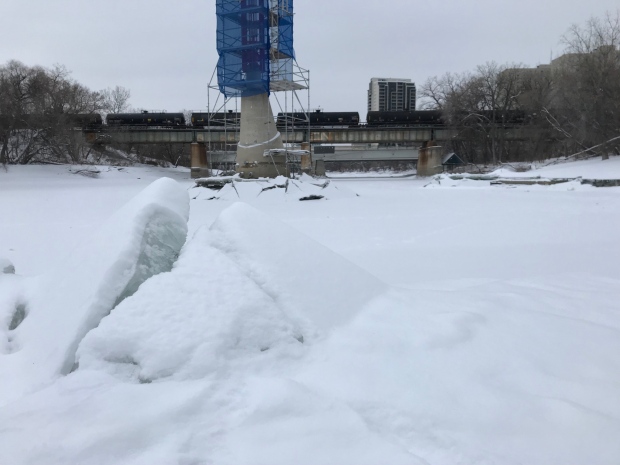 WINNIPEG — As winter approaches many Winnipeggers are gearing up for some of their favourite winter activities – like skating on the Red River Mutual Trail. However, this year they may not be so lucky.

“We’ve been really lucky the past number of years,” said Larissa Peck, the manager of marketing and communications for The Forks.

“We have had a really simple fast freeze that gives us a beautiful trail. This year it’s kind of a touch and go, wait and see kind of thing.”

This season, the Red River froze at a level that hasn’t been seen in over 40 years.

“We had these high water levels, and so the ice did freeze…at a very high water level,” said Dr. Christopher Love, the Water Smart coordinator for the Life Saving Society of Manitoba.

“When the water level dropped, you ended up with basically an air bubble underneath the ice.”

Dr. Love said ice typically floats on the surface of the water, and if it doesn’t, it becomes very unstable.

“The ice basically can’t support its own weight,” said Love.

“Maybe it can for a little bit of time, but as soon as you put other weight like snow or a person on it, it collapses.”

The last time The Forks didn’t have a river trail was back in 2000. Peck said that was when they first introduced the on-land skating trails.

“When we’re presented with those kinds of situations it’s totally an opportunity to get creative,” said Peck.

“I’m excited to see what this challenge brings us this year.”

The Forks said it’s still too early to make a definitive decision on the fate of this year’s river trail.