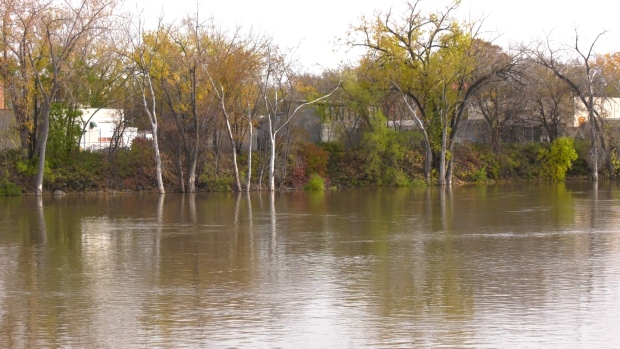 WINNIPEG — The Manitoba government announced on Friday that Red River levels are expected to peak in the coming days.

According to a report released by the province, the peak date at Emerson is expected between April 15 to 18. It is anticipated to reach the Red River Floodway between April 19 to 24.

CTV News Winnipeg previously reported the province started to lift the Red River Floodway gates on Friday evening. With the operation of the floodway, the province said, the Red River levels at James Avenue are expected to crest at 19 to 19.5 feet between April 13 and April 19. It currently sits at 18.72 feet.

During a news conference last Monday, the City of Winnipeg said the crest was expected over the Easter weekend.

As of Saturday morning, the Red River at Fargo sits at 27.31 feet, with the Red River of the North at East Grand Forks at 47.1 feet.

The Manitoba government also noted that several roads are impacted by high water levels, including:

HOW THE CITY OF WINNIPEG IS PREPPING

On Monday, the City of Winnipeg said 41 properties have been identified as needing sandbag dikes built to protect them.

Jason Shaw, assistant manager of emergency operations for the City of Winnipeg, said the city can help people who are having difficulty in finding volunteers to assist them in building the dikes.

He noted the city will adhere to physical distancing measures when sandbagging.

“If we’re washing our hands, if we’re not showing up to build a sandbag dike if you’re sick, if you’re sick, please stay home, and if you’re using gloves and a little bit of protective equipment, then we really minimize the risk as best as possible,” Shaw said, noting that sandbagging home still remains the responsibility of the homeowner.

City workers are monitoring the river levels and working with the province to determine whether additional properties need sandbag dikes. Only property owners contacted directly from the city are considered at risk, but if someone thinks their property is at risk and hasn’t heard from the city, they should contact 311.

– With files from CTV’s Mason DePatie and Charles Lefebvre.