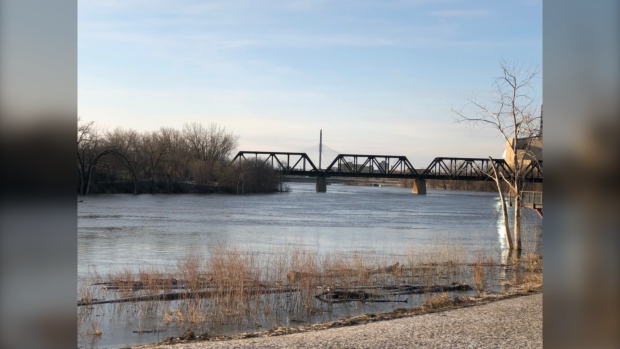 WINNIPEG — The Red River at James Avenue has dropped Tuesday morning as the Manitoba government predicts it to crest in the coming days.

According to the City of Winnipeg’s website, water levels are currently sitting at 17.99 feet. On Monday they were slightly higher at 18.11 feet.

In the province’s latest flood report, it said water levels on the main stem of the Red River will rise more quickly in the coming days, but some crest times have shifted slightly later. It noted the Red River at Emerson is expected to peak between April 18 and 21 and reach the Red River Floodway between April 24 and 26.

The province is also reporting that flood warnings are in place for the Red River from Emerson to the Red River Floodway inlet, just south of Winnipeg, as well as from PTH 4 to Netley Creek. A warning has also been issued for the Roseau River between Gardenton and PR 218.

A flood watch is in place for the Red River from Lockport to PTH 4.

The following roads have been impacted by high water levels: