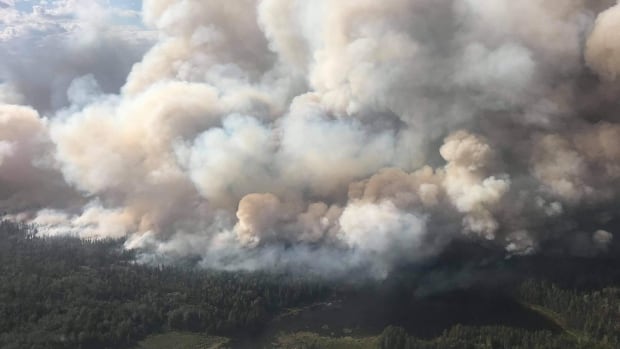 Residents of Red Lake are starting to return to their homes after a forest fire forced the evacuation of the community several days ago.

The fire, known as Red Lake 49, was burning just two kilometres from the community.

However, things took a turn for the better over the past few days, said Red Lake Mayor Fred Mota, with heavy rain in the area helping forest fire fighters battle the blaze; Mota said about 50 millimetres of rain fell in some parts of the fire area overnight Friday.

On Sunday, Chris Marchand, fire information officer with the province, said the fire’s status had changed to under control on Sunday morning.

The province also lifted an order restricting access to Red Lake as of 7 a.m. Sunday, clearing the way for residents to return.

“They’re just looking for some small hotspot,” Mota said, adding the Ministry of Natural Resources and Forestry [MNRF] “was 100 per cent confident for the return of our residents to the community.”

“We do have residents returning to the community,” he said. “There’s pockets of vehicles coming up northbound on [Highway] 105.”

Marchand cautioned, however, that fire suppression activities are ongoing in the area.

“We’d like to ask residents to please be mindful of crews that are working on the fire, and near roadways,” he said.

Some Red Lake residents were flown to other municipalities, including Thunder Bay; Mota said Sunday flights home were being rescheduled, and those residents would likely start heading back to Red Lake on Monday.

As for the fire itself, Mota said it was kept about two kilometres from Red Lake’s west end, but still caused some infrastructure damage to hydro and phone lines in the area.

Mota said there was no damage to any homes or businesses.

“I’m just so proud of our community, and our organizations, and our residents for being patient during these difficult times,” he said. “Red Lakers are resilient, and we will come back from this.”

Marchand said 24 crews remain on the scene fighting the fire, and they had established a hose line around the fire.

There are also “six sustained-action crews, who are really part of the mop-up phase of this fire,” Marchand said.

The fire is still about 55 hectares in size, Marchand said, but hasn’t grown since Wednesday.

“Once a fire’s control status changes to under control, that’s a fairly important milestone in the journey of a fire from not under control toward out,” he said. “That signifies a certain amount of demobilization, so areas they are confident in, they’re starting to demobilize, say, values protection and things like that.”

“It’s definitely another great sign that this fire is proceeding toward its conclusion.”