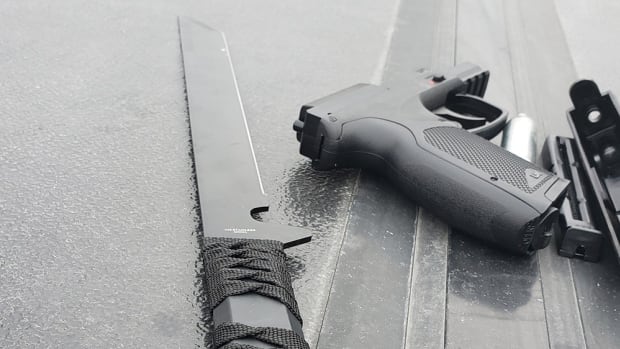 Two men each face ten charges after RCMP accused them of selling drugs out of a stolen truck in Portage la Prairie last week.

RCMP in the city, which is located about 85 kilometres west of Winnipeg, said they received a report shortly after 9 a.m. on Friday of a couple of men who were accused of selling drugs in a black truck at a business on Saskatchewan Avenue West.

RCMP said officers determined, while en route, that vehicle had been stolen out of Winnipeg.

Officers found imitation guns, a machete, bear spray and drugs after they arrived and searched the truck, an RCMP release said on Tuesday.

The men, both 30-years-old, each face ten charges, including unauthorized possession of a prohibited weapon, possessing weapons for dangerous purposes and against orders, possessing property obtained by crime and possessing methamphetamine.

One of the suspects is also charged for failure to comply with a release order, and the other for driving while prohibited, RCMP said.

Mounties are continuing to investigate.