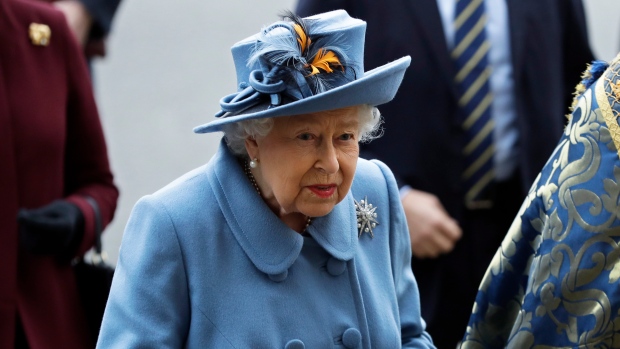 TORONTO — The Queen will present a rare broadcast to the Commonwealth on Sunday as coronavirus cases surge past 1.2 million globally.

Buckingham Palace confirmed the address on Friday through its social media accounts, adding that viewers can tune in on television, radio or online at 3 p.m. EDT.

Tune in to watch the Queen’s public address over the coronavirus outbreaklive here.

While the Queen delivers a special televised speech every Christmas, other such broadcasts are less common, typically reserved for wars and major deaths in the Royal Family.

Health officials have recorded more than 65,000 deaths globally related to COVID-19. More than 4,300 have died in the United Kingdom as of Sunday morning.

The spread of the novel coronavirus, which the World Health Organization declared a pandemic on March 11, has resulted in widespread cancellations and restrictions on movement. In March, Buckingham Palace said the 93-year-old monarch would be postponing scheduled engagements because of the virus. Later that month, her son Prince Charles tested positive for COVID-19, but was out of self-isolation and reportedly healthy by April.

In a video posted online, the Prince of Wales said his symptoms of the disease were “relatively mild.”

“At such an unprecedented and anxious time in all our lives, my wife and I are thinking particularly of all those who have lost their loved ones in such very difficult and abnormal circumstances, and of those having to endure sickness, isolation and loneliness,” he said.

Her Majesty The Queen will address the UK and the Commonwealth in a televised broadcast.

As well as on television and radio, The Queen’s address will be shown on The @RoyalFamily’s social media channels. pic.twitter.com/EADh7WNU7b