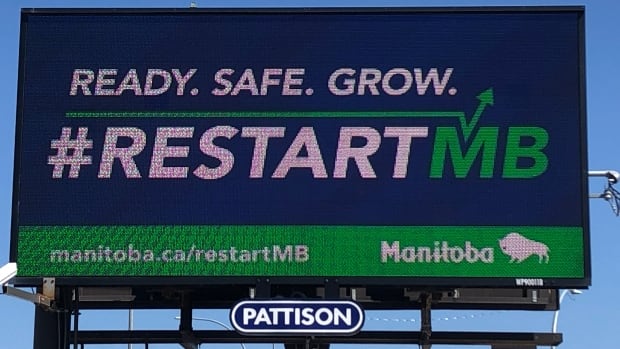 The province plans to spend up to $425,000 this year on its “Restart Manitoba” ad campaign, which is intended to promote a safe reopening of the provincial economy in the midst of the COVID-19 pandemic.

Earlier this month, the province took out billboard advertisements and radio spots to promote the economic recovery plan.

The billboards featured the “Restart Manitoba” catchphrase and the slogan “ready, safe, grow.”

That system uses four colour codes to convey the level of pandemic risk in a given area of the province.

Most of Manitoba is designated yellow, for caution, while the entire Prairie Mountain health region in southwestern Manitoba has been upgraded to orange, or restricted.

Pallister said earlier this month the ad campaign promotes public health while allowing people to feel more confident about going back to work and contributing to the economy.

“We know that the two things go hand in hand — that if we have a safer society, we’re going to have people more confident to go to work, to shop, and create more job opportunities for those who deserve a chance to get back to work,” he said in Brandon on Aug. 12.

“They’re symbiotic things — the safer we are as people, the more confident we can be and the more ready we will be to help our neighbours get back to work.”

Opposition leaders have called the campaign a waste of money.