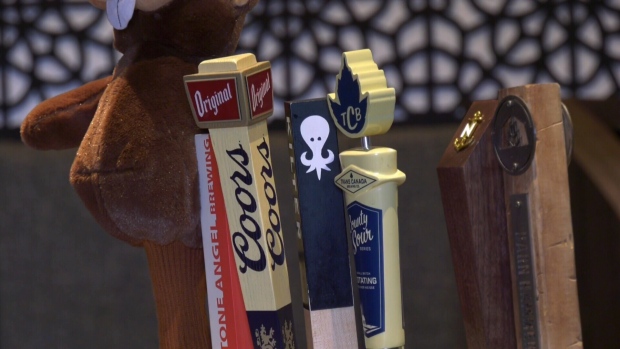 WINNIPEG — In a last-minute change to COVID-19 restrictions in Winnipeg, beverage rooms will no longer need to close, according to the Manitoba Hotel Association.

In a letter obtained by CTV News, Scott Jocelyn president and CEO of the Manitoba Hotel Association (MHA), said the province has made an ‘about-face’ when it comes to the restrictions on beverage rooms.

New measures for the Winnipeg Metropolitan Region announced on Friday came into effect on Monday. The restrictions, among other things, limit group sizes to five people and force the closure of beverage rooms, bars, live entertainment facilities, casinos and bingo halls.

But according to the MHA, beverage rooms will no longer need to close as previously announced by the province.

It said only entertainment facilities will now be required to shut down. All other liquor licenses, including restaurants, lounges and beverage rooms will be allowed to open at 50 per cent capacity, with no more than five people seated at a table.

The association said other restrictions are still in place for beverage rooms. These include shutting down liquor sales and service by 10 p.m. and have patrons leave the restaurant by 11 p.m., a sound restriction of 80 decibels, and a restriction on dancing, pool and darts. Information on patrons must also be collected.

Jocelyn said the association has been calling on the government to reverse the restrictions announced on Friday.

“We are glad to have been successful, but we are sorry about the stress and uncertainty you have had to endure,” Jocelyn said in the letter to members.

Gerald Lambert, the president of the St. Norbert Hotel, told CTV News he received word about the reversed restriction from the MHA Monday night.

“Cooler heads have prevailed and it certainly is going to assist our business,” he said. “We are by no means out of the forest here, but it certainly gives us the opportunity to play ball.”

Lambert said he plans to reopen his beverage room on Tuesday morning and return to ‘business as usual’ within the existing restrictions.

CTV News has reached out to the province for comment.

-with files from CTV’s Jill Macyshon