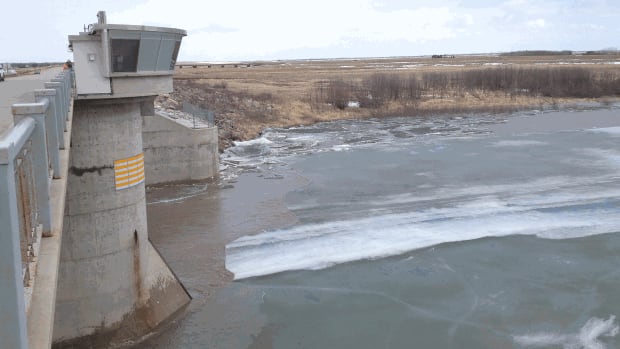 The province lifted the Red River Floodway gates Friday evening, some time between 6 p.m. and 7 p.m., as ice started moving near the floodway inlet.

On Wednesday, the province said the floodway might open as soon as Thursday, but that it was waiting for ice jams in the Red River to clear up before doing so.

Some of those ice jams caused flooding south of Selkirk on Wednesday, and forced the province to shut down the Red River Bridge near the community.

Some properties in the rural municipality of St. Andrews also experienced some flooding on Wednesday, but no homes were threatened at that time.

Manitoba Infrastructure estimates the Red River will crest near Emerson between April 15 and 18.

The province released crest projections for the Red River in other parts of Manitoba as well:

The Red River’s crest could max out between 19 and 19.5 feet James — a unit of measurement for river height at James Avenue in Winnipeg — which would be considered a moderate flood.

A stretch of nearly 40 kilometres along the I-29, from Manvel — just north of Grand Forks — to Grafton, N.D., was affected by the closure, as were some roads stemming from the highway.

Workers from the Department of Transportation starting putting up inflatable flood barriers along the I-29 Thursday.

The Red River is projected to crest in Grand Forks on Friday and no sooner than April 17 near the border, according to the U.S. National Weather Service.