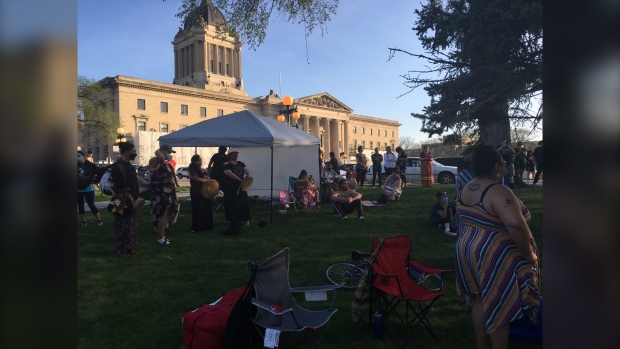 WINNIPEG — More than a hundred people gathered on the legislative grounds Wednesday night, to protest an injunction ordering demonstrators in northern Manitoba end their blockade of the Keeyask hydro project.

“We don’t have the adequate health care systems to deal with a mass outbreak of COVID-19 in the north,” said organizer and camp leader Brielle Beardy-Linklater.

Beardy-Linklater said the camp was set up outside the legislature seven days ago, in solidarity with the Tataskweyak Cree Nation.

There were signs near tents reminding demonstrators  to keep two metres apart.

On Tuesday, Scott Powell, Manitoba Hydro’s director of corporate communications, said, “The injunction further proves the plan we have to safely resume work rotations at Keeyask protects both our workers and neighbouring communities from COVID-19.”

But demonstrators say the project is threatening vulnerable communities.

“The immediate danger is that people get sick up north,” said personal care worker Crystal Anderson. “There are little to no resources for health care.”

The Keeyask Project is 725 kilometres northeast of Winnipeg on the lower Nelson River. The work site is exempt from a ban barring travel to the north.

“I can’t even go to Kenora,” said Anderson. “Why are people coming to Manitoba from Ontario? Hold off, just wait.”

Sharice Sinclair said she is also frustrated that new workers are coming to the north, while she isn’t allowed to visit her three-year-old daughter who lives in Churchill.

“I’m not allowed to see my family. I’ll get fined. Why is Keeyask helicoptering them in or bringing a bus load in?” asked Sinclair. “That is so wrong.”