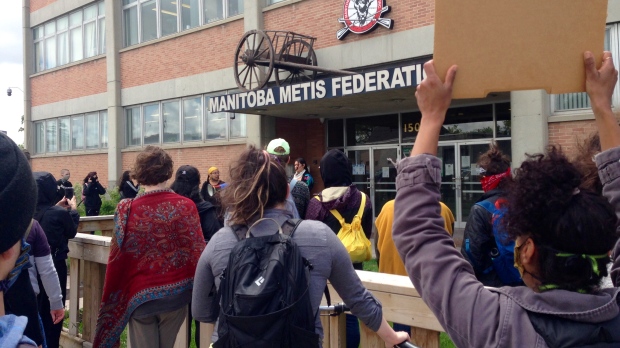 WINNIPEG — A rally is currently underway outside of the Manitoba Metis Federation building in protest of the dismantling of a homeless camp in the city.

The rally, organized by Aboriginal Youth Opportunities, began Wednesday afternoon. The rally is called “No Evictions on Stolen Land,” and is protesting the displacement of people living in the camp.

A crowd could be seen gathering outside of the Manitoba Metis Federation building Wednesday afternoon.

The MMF threatened legal action against the City of Winnipeg, saying it witnessed illegal drug use and sales, indecent exposure, and loitering at a homeless camp that had emerged near the Disraeli Freeway.

A letter to the city from the MMF went on to say its parking lot and fence had been urinated and defecated on and that staff had been threatened and harassed.

Rick Lees from Main Street Project said eviction notices were handed out, with people being told to leave by noon on Friday.

Firefighters could be seen extinguishing a fire at the camp in the morning. Robert Russell, a homeless man living at the camp, said the fire was started by another resident of the camp.

CTV News has reached out to the City of Winnipeg for more information on the fire and the eviction notices.