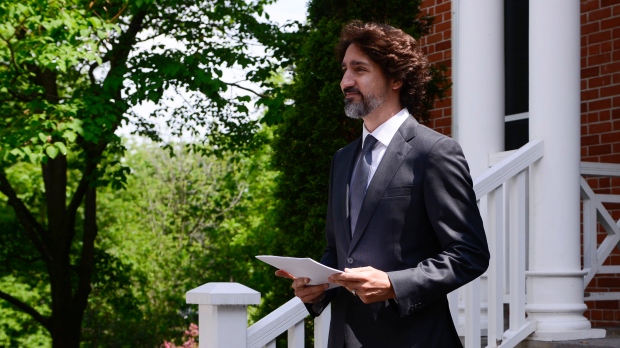 OTTAWA — Prime Minister Justin Trudeau says a new bill the federal government is advancing to crack down on fraudulent claims for the Canada Emergency Response Benefit is not about punishing people who made “honest mistakes.”

“There may be a number of people who mistakenly took both the CERB and the wage subsidy because they weren’t sure what they were going to do, and they were really worried and they just took everything. Those people will simply have to pay back the one that they shouldn’t have been taking,” Trudeau said. “We’re not looking at punishing people who made honest mistakes, obviously. This is a time for us to pull together as a country.”

Rather, he said the intention is to make sure that “that those who knowingly and wrongfully claim the CERB face consequences,” in an effort to reassure Canadians that their taxpayer dollars are not freely going to the small number of bad actors that have sought to deliberately defraud the system.

“Unfortunately, in every situation there are a few criminals who will deliberately try to take advantage of a moment of solidarity, a moment where we’re in crisis and we’re trying to help each other out,” Trudeau said.

This comes as his government works to secure support for the bill, amid concerns from the NDP that people who may have registered for the CERB, despite not meeting the qualifications, aren’t penalized disproportionately.

The House of Commons has been recalled on Wednesday for an emergency session to pass what will be the fifth piece of COVID-19-prompted federal legislation. As part of the bill — which outgoing Conservative Leader Andrew Scheer has called “omnibus” — the Liberals are looking to impose fines and jail time for those who fraudulently claimed or tried to claim CERB, in addition to including new language to prompt those who can go back to work to do so.

The government shared the draft text with opposition parties over the weekend, in part to allow for pre-study of what’s being proposed before MPs vote on whether to fast-track its passage.

“Discussions are ongoing, but I fully expect us to be able to work well with the opposition to deliver this important support to Canadians,” Trudeau said Tuesday during his Rideau Cottage address.

WHAT THE BILL SAYS

A copy of the draft legislation obtained by CTV News — which has yet to be tabled and is subject to change pending ongoing negotiations with the opposition parties — shows that the government wants to impose new enforcement mechanisms for those who knowingly make false or misleading benefit claims, as well to deter people from turning down work opportunities to stay on the federal assistance program.

If the bill passes as drafted, people would become ineligible for CERB if they fail to return to work when it is reasonable to do so and their employer has asked them back, or if they decline a reasonable job offer when they are able to work. It also proposes changes around the application periods that would allow people to claim CERB for a two-week period rather than the current four-week period, should they need to be off work because they are symptomatic or taking care of someone who may have COVID-19, for example.

The program offers $2,000 per month and was introduced in late March in an effort to help those who were out of work due to the COVID-19 pandemic and the cross-Canada shutdown it prompted. As of June 7, more than 8.4 million Canadians have applied for CERB, receiving a total of $44.6 billion.

Trudeau emphasized on Tuesday that the focus in rolling out the program was speed over implementing a series of checks and verification measures in order to get the funding out to those who needed it quickly. He said the intention from the start was to clean up after the fact and come after knowing fraudsters.

These proposed changes come as the government is mulling how to evolve the program as the economy reopens and many businesses are able to bring their staff back into work. The initial hope was that once the 75 per cent wage subsidy program got off the ground, a large number of laid-off workers would be re-hired with the help of the subsidy, but so far take-up has been far below what was initially projected by Finance Canada.

Trudeau made an effort again on Tuesday to encourage employers to access the 75 per cent subsidy for employees’ wages.

“The Canada Emergency Response Benefit was created for the time when we were telling everyone: ‘stay home, don’t go to work, shut down your businesses, keep your neighbours safe.’ It was there to replace revenue at a time where massive parts of the economy were completely shut down, and it serves and served its purpose extremely well and will continue to be necessary until we move forward enough to get to get to most people back to work,” Trudeau said.

The draft bill also includes proposed technical eligibility changes to the wage subsidy program; proposes to make the changes needed in order to implement promised one-time payments to eligible Canadians with disabilities; and would create a new bill to rectify the risk of Canadians being penalized for missing key deadlines in ongoing legal matters due to the ongoing COVID-19 pandemic.

NDP Leader Jagmeet Singh came out Tuesday morning in strong opposition to the bill as it is currently drafted, saying that he’s opposed to penalizing or imprisoning vulnerable people who applied for CERB because they needed the help.

However, the bill’s language focuses on fraudsters who “knowingly” scam the system, and not those who may have double-dipped due to confusion between this program and other financial aid offerings from the federal government.

Singh tied his opposition to the ongoing conversation around the overrepresentation of people of colour in Canada’s criminal justice system, saying this is not the moment to be talking about new criminal justice measures.

“What I want to see is completely removing the penalty approach. The criminal approach, putting people in jail, giving people massive fines is not the right approach. There are far better tools, particularly in a pandemic that we should be using,” Singh said.

The NDP also wants to see the benefit program eligibility window extended to be available longer.

Asked whether an extension could be on the table, Trudeau said that “it’s going to be a while” before enough Canadians return to work or find new jobs for the economic situation to be considered back to some degree of normal, vowing that the federal government will continue to assist people along the way.

The Conservatives have so far not specified whether they will support the bill once it is tabled, though in the past they have expressed concern about fraudulent CERB claims and a lack of incentive for people to return to work.

“We know that the economy is uncertain for many Canadians. Some provinces are opening up, some industries are but many aren’t, so we need to make sure we balance getting supports to Canadians — but making sure that value for money is there. Look, nothing gets people more riled up and seeing their tax dollars being given to the wrong people,” said Conservative MP Dan Albas on CTV’s Power Play.