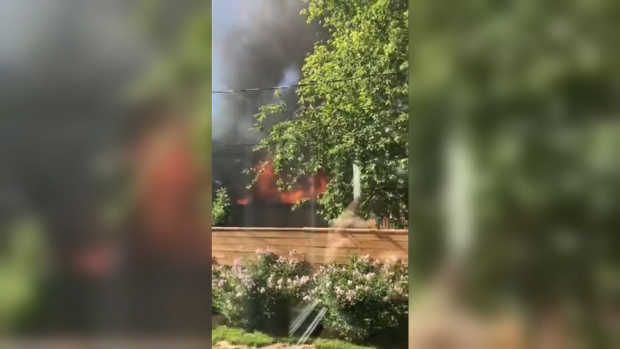 The cause of a fire that left two Winnipeg firefighters with minor injuries is under investigation.

According to the City of Winnipeg, two firefighters were left injured after flames broke out in a home on Borebank Street Thursday.

The city said Winnipeg Fire Paramedic Service was called at 5:19 p.m. to a one-storey home in the 700 block of Borebank Street.

The city said heavy smoke and flames were coming from the home when crews arrived. The fire was under control at 7:01 p.m.

Everyone inside the home got out safely before firefighters were on the scene. The city also said two dogs were safely removed from the home and reunited with their owners.

The two injured firefighters were assessed on the scene, but neither needed to be taken to hospital.

The home was significantly damaged by smoke, water, and fire but no damage estimate was available Thursday night.

“I knew that the homeowner had dogs,” said Taren Gesell, who lives nearby. “And I wanted to make sure he and the dogs were out so I banged on the front window to see if they were in there.”

Gesell said he was on the phone with the homeowner, who wasn’t home at the time, but heard the dogs barking after knocking on the window. He said that’s when he and another neighbour stepped into action.

“We wen’t into the house, opened the door, just stepped in a food, and got them out,” said Gesell.

He said there were three dogs in the house. “They were pretty shooken up,” said Gesell.

He said the dog’s were nervous after being rescued, he said one of them almost ran back into the house after seeing people gathered in front.

“He started getting nervous there, he almost wanted to run back into the house, so we had to coax him out,” said Gesell.