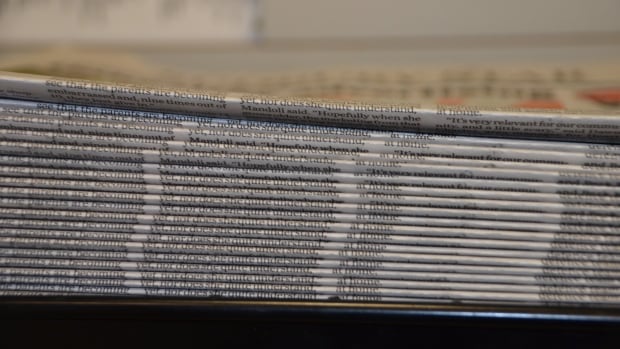 Lori Penner says she’ll miss the weekly calls she got to Altona’s Red River Valley Echo, from people asking her to check the newspaper’s archives— for a little tidbit of the community’s past.

“I still get people calling and saying, ‘Can you look up an old newspaper clip that my grandpa was in? Or can you look up a photo of a sports team from 1981?'” she said.

Penner learned yesterday that her newspaper is one of eight Manitoba Postmedia-owned newspapers that will shut down. The newspaper and digital conglomerate is citing declining ad revenue.

The newspaper chain also announced it was shutting down seven community newspapers in Ontario.

“I’m still kind of reeling from it,” Penner said. “I knew that our ad revenue was down, as is the case with every paper these days. I had really hoped that we could pull through. COVID didn’t do a lot of good for a lot of papers.”

Penner will prepare the last addition of the Red River Valley Echo next Thursday. It was in its 79th year of production.

“A small town, community paper—it’s an institution. I think it will be very, very missed,” she said.

It’s “terribly sad news” for Greg Vandermeulen, editor of the Carillon in Steinbach, Man. who previously worked for five of the Postmedia newspapers since 2003.

“When you lose these types of papers, and this number of papers, it definitely just leaves a hole in these communities,” he said.

The loss will be felt particularly in cities and towns that aren’t served by another newspaper, he said.

“They hold local councils, local school boards … accountable. They’re also the main source of information for everybody who lives in those communities. They’re also a place where you tell a good story, you read and share the triumphs of the community.”

Vandermeulen said cuts over the last few years have had an impact on the newspapers’ ability to properly cover their communities.

“The reporters that worked in them, on the ground, were doing the best job they could possibly do,” he said.

However, the mayor Winkler, Man. said in his community, other news media sources have been filling a void left by Postmedia years ago.

“Postmedia has not been very successful in running the paper locally, because the local piece of it was missing for several years,” said mayor Martin Harder.

“I heard a lot of complaints about how the paper itself just became an advertising carrier rather than content that was local.”

“For us, we will see no noticeable difference,” he said, pointing to the success of competing newspaper Winkler Morden Voice, which is locally-run.

For us, we will see no noticeable difference.– Winkler mayor Martin Harder

The majority of the closures will happen in places where another newer and community-owned newspaper has come around, according to Ken Waddell, chair of the Manitoba Community Newspapers Association.

Locally-run newspapers have been holding up better during COVID-19 than those owned by corporate entities, Waddell said, who is also the publisher and owner of the Neepawa Banner.

“Our newspapers’ advertising has held up pretty good. I understand there are some that have lost advertising, but… I think it’s more of a last straw rather than a fundamental cause,” he said.

In an interview with CBC Manitoba’s Radio Noon, Postmedia president and chief executive Andrew MacLeod said the papers were losing a lot of money and weren’t viable anymore, especially during a time when the newspaper industry has seen an “unprecedented” decline in ad revenues.

“We were forced into this decision,” he said, adding that he regrets the company won’t be able to support these communities anymore by providing them with local news.

He said the company will explore ways it can maintain a digital presence in the affected communities, but the physical papers are likely a thing of the past.