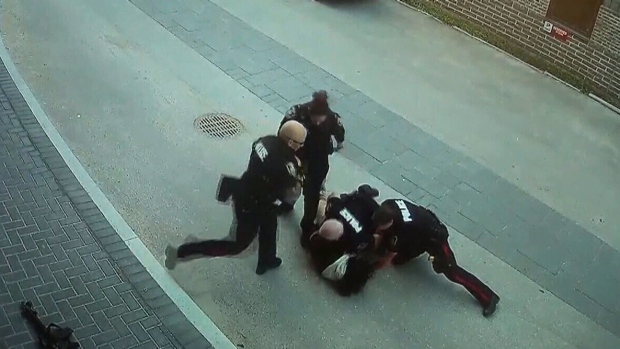 WINNIPEG — Winnipeg police provided details about a video posted online showing an arrest made in the Exchange District Thursday, during a press conference Friday afternoon.

“Admittedly it’s a tough video to watch, it shows use of force by our officers,” said Const. Jay Murray of the Winnipeg Police Service.

The video was posted to social media by Winnipeg Police Cause Harm on Thursday, a group that describes itself on Facebook as “a police abolitionist organization fighting against the power and violence of the Winnipeg Police Service.”

The video shows officers attempting to restrain a suspect on the ground. In the video, one of the officers kicks the suspect twice. A total of five Winnipeg police officers can be seen in the video responding to the arrest.

Winnipeg police said on Thursday they were responding to a weapons complaint at the Centennial Concert Hall.

According to police, a 33-year-old who was allegedly on meth, vandalized a section of the building, smashed a window, and broke into the building.

After being confronted by security, police say the man left the building, brandished what appeared to be a handgun terrifying several pedestrians.

Police said on Friday the handgun was determined to be an airsoft gun.

Police said the man refused to listen to police commands to get on the ground, and allegedly assaulted an officer when they tried to arrest him.