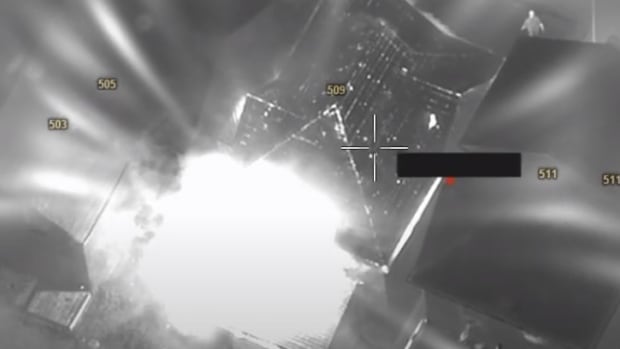 Fire belched out the front windows of a house while a wall of flames engulfed the back during a dramatic video captured by Winnipeg’s police helicopter on Friday morning.

Air1 was on routine patrol just before 3 a.m. when the officers spotted the raging fire at a multi-family home on William Avenue, just off Isabel Street, in the city’s Centennial Neighbourhood.

In the black-and-white video, people can be seen rushing around the house and gesturing in a panicked way as the flames grow in size. The roof began to glow between shingles as the flames burned their way through the top of the house.

No emergency vehicles were on scene yet, so Air1 called fire crews and dispatched other officers. The police, who arrived first, reported the possibility that a baby was still inside.

Using fire extinguishers to clear flames from the entrance, officers were able to get into the house and help six others escape. The fear about the baby was unfounded.

Fire crews rushed to the scene shortly afterwards and extinguished the flames.

No injuries were reported but the building was significantly damaged.