Home  »  News   »   Police and protesters clash in violent weekend across the U.S. 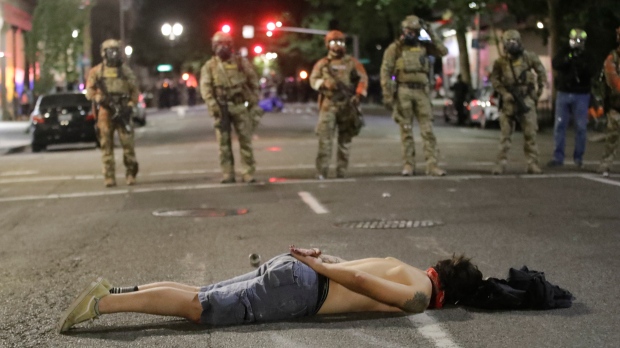 ATLANTA — Protests took a violent turn in several U.S. cities over the weekend with demonstrators squaring off against federal agents outside a courthouse in Portland, Oregon, forcing police in Seattle to retreat into a station house and setting fire to vehicles in California and Virginia.

The unrest Saturday and early Sunday stemmed from the weeks of protests over racial injustice and the police treatment of people of colour that flared up after the May 25 death of George Floyd in Minneapolis. Floyd, who was Black and handcuffed, died after a white police officer used his knee to pin down Floyd’s neck for nearly eight minutes while Floyd begged for air.

In Seattle, police officers retreated into a precinct station early Sunday, hours after large demonstrations in the city’s Capitol Hill neighbourhood. Some demonstrators lingered after officers filed into the department’s East Precinct around 1 a.m., but most cleared out a short time later, according to video posted online.

At a late-night news conference, Seattle police Chief Carmen Best called for peace. Rocks, bottles, fireworks and mortars were fired at police during the weekend unrest, and police said they arrested at least 45 people for assaults on officers, obstruction and failure to disperse. Twenty-one officers were hurt, with most of their injuries considered minor, police said.

In Portland, thousands of people gathered Saturday evening for another night of protests over George Floyd’s killing and the presence of federal agents recently sent to the city by President Donald Trump. Protesters breached a fence surrounding the city’s federal courthouse building where the agents have been stationed.

Police declared the situation to be a riot and at around 1:20 a.m., they began ordering people to leave the area surrounding the courthouse or risk arrest, saying on Twitter that the violence had created “a grave risk” to the public. About 20 minutes later, federal officers and local police could be seen attempting to clear the area and deploying tear gas, however protesters remained past 2:30 a.m., forming lines across intersections and holding makeshift shields as police patrolled and closed blocks abutting the area. Multiple arrests were made, but it wasn’t immediately clear how many.

In the Texas capital of Austin, 28-year-old Garrett Foster was shot and killed Saturday night by a person who had driven through the march against police violence.

Austin Police Chief Brian Manley said a car turned onto the block where protesters stood and honked its horn. The driver and several witnesses told police that Foster approached the driver and pointed an assault rifle at them.

In video streamed live on Facebook, a car can be heard honking before several shots ring out and protesters start screaming and scattering for cover. Police could then be seen tending to someone lying in the street.

Manley said the driver called 911 to report the incident and was later taken into custody and released. Police didn’t immediately identify the driver.

Sheila Foster, Garrett’s mother, said she was told her son was pushing his fiancee, who uses a wheelchair, through an intersection when the suspect was driving “erratically” through the crowd. She said she was told the driver shot her son three times.

In the Denver suburb of Aurora, Colorado, meanwhile, a protester shot and wounded someone after a car drove through a crowd marching on an interstate highway, police said. The wounded person was taken to a hospital in stable condition. Police didn’t release many details about the shooting, including whether the person who was shot had been in the car. Police said on Twitter that demonstrators also caused “major damage” to a courthouse.

In Virginia’s capital, Richmond, a dump truck was torched as several hundred protesters and police faced off late Saturday during a demonstration of support for the protesters in Portland. Police declared it to be an “unlawful assembly” at around 11 p.m. and used what appeared to be tear gas to disperse the group. Five people were arrested in the incident and charged with unlawful assembly. A sixth person was also arrested and charged with rioting and assault on a law enforcement officer.

In downtown Atlanta on Sunday, federal agents examined damage to an Immigration and Customs Enforcement facility where windows were shattered late Saturday. The FBI and the Department of Homeland Security, FBI spokesman Kevin Rowson said in an email. No arrests had been announced.

And in Baltimore, people from a group of nearly 100 demonstrators spray-painted anti-police messages on a Fraternal Order of Police building and adjacent sidewalks on Saturday night, The Baltimore Sun reported.

Associated Press writers Gillian Flaccus and Sara Cline in Portland, Oregon, and Sally Ho and Chris Grygiel in Seattle contributed to this report.