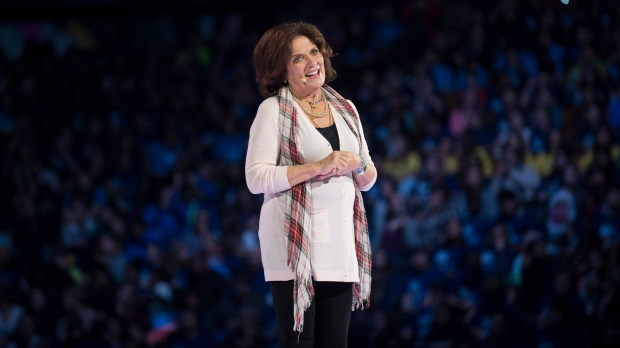 OTTAWA — Members of Prime Minister Justin Trudeau’s family were paid a total of nearly $300,000 over the last four years to speak at WE Charity events.

The charity group is at the centre of an ethics investigation into Trudeau.

Over $60,000 of that money, which is typically dolled out by corporate sponsors, was paid directly to Margaret Trudeau by the charity as the result of what WE Charity referred to as an “error” in billing and payment.

WE Charity confirmed the figures in a statement sent to CTV News.

WE Day is an event that WE Charity organizes alongside corporate partners who sponsor speakers to participate. One of those corporate sponsors is ME to WE Social Enterprise, which was the organization that paid Margaret Trudeau’s speaking fees through the Speakers’ Spotlight Speakers’ Bureau. Alexandre Trudeau was also paid through Speakers’ Spotlight.

However, while the two were paid a total of over $300,000 to speak at the events, over $60,000 of Margaret Trudeau’s speaking fees were paid directly by the charity.

The charity called this an “error in billing/payment” that was discovered through an “internal review.”

“For these speeches the charity paid the speakers’ bureau directly, and the charity was reimbursed by ME to WE Social Enterprise for their sponsorship of the speeches,” WE Charity said in a statement sent to CTV News.

In addition to the thousands of dollars ME to WE has paid to Trudeau’s mother and brother over the years, the prime minister’s wife also has close ties to WE Charity. Sophie Gregoire Trudeau is an ambassador with the organization and hosts a mental health podcast under its name.

Trudeau has also spoken at a number of WE events globally.

In an emailed statement sent to CTVNews.ca, Chantal Gagnon, a spokesperson for the Prime Minister’s Office, said Trudeau’s relatives “engage with a variety of organizations and support many personal causes on their own accord.”

“What is important to remember here is that this is about a charity supporting students. The Canada Student Service Grant program is about giving young people opportunities to contribute to their communities, not about benefits to anyone else,” she said in the statement.

However, the charity is already at the centre of an ethics investigation into Trudeau over his potential conflict of interest with the organization.

The federal ethics commissioner launched an investigation into Trudeau last Friday over his government’s now-cancelled decision to have WE Charity manage a $900-million federal program, which is slated to pay students and new graduates for their volunteer work this summer.

While the charity has backed out of the management of the program following days of controversy, Ethics Commissioner Mario Dion said in a letter addressed to Conservative MP Michael Barrett that the Tory MP’s request for an investigation “satisfies the requirements” laid out in the Conflict of Interest Act.

He claims that Trudeau had a duty to recuse himself from any discussion or decision relating to WE Charity, given the prime minister’s close ties to the organization and his wife’s involvement, and that Trudeau violated the Act when he announced that WE Charity would administer the Canada Student Service Grant.

Barrett also alleges Trudeau violated another section of the Act that deals with affording preferential treatment when he said WE Charity was the “only organization” qualified to run the program — given the existence of other national volunteer organizations.

The ethics watchdog found that Barrett’s allegations satisfied the requirements of the Act and has launched an investigation into both possible contraventions. Dion notes in his letter that Trudeau has been informed of the investigation.

Gagnon said in a statement sent to CTVNews.ca on Friday that the prime minister plans to “collaborate” with the commissioner and will “answer any questions he may have.”